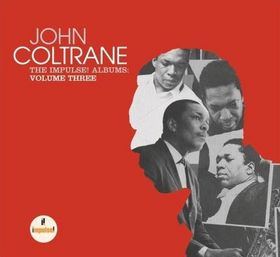 All these albums were recorded during 1965, and released between August 1965 and January 1967, during Coltrane's lifetime (he died in July 1967). All are presented as originally released on LP, with no alternative takes or additional material (except for Ascension, which, as on its first CD reissue, includes a second take of its single, eponymous track).

According to the version of the Coltrane story told by some of his critics, A Love Supreme is the watershed album in the saxophonist's canon: anything recorded before it is regarded as a more or less valid part of the jazz continuum; anything recorded after it is regarded as a travesty—ugly and nihilistic. The Impulse! Albums - Volume Three offers an opportunity to re-examine this position, and finds it to be massively inaccurate. (The debate surrounding Coltrane's music became newly vituperative and entrenched around this time. For a while, Down Beat magazine routinely assigned two reviewers to each Coltrane release: a pro and an anti).

Certainly, following A Love Supreme, recorded in December 1964 and rush released in January 1965, Coltrane went through some profound changes. While he never afterwards entirely abandoned swing, motor rhythms, lyricism or pre-determined chord sequences and modes, he became increasingly fascinated by sonic experimentation, free improvisation and free rhythm. 1965 was also the year in which Coltrane's "classic quartet"—with pianist McCoy Tyner, bassist Jimmy Garrison and drummer Elvin Jones, with whom he'd been recording since 1961—began to fall apart, to be replaced by a series of new line-ups and one-off projects. Tyner left at the end of the year, Jones in January 1966, and Garrison a few months later. The players were replaced by emergent members of the "new thing:" saxophonist Pharoah Sanders became a fixture in September 1965, drummer Rashied Ali that November.

But far from the monolithic series of "anti-jazz" albums Coltrane's detractors would have history relate he recorded following A Love Supreme, his 1965 recordings actually embraced a rainbow of perspectives, from groove-centric, percussion-heavy, nascent world jazz through standards to minimally arranged and audacious big band experiments.

The John Quartet Plays, recorded in February and May 1965 and released in August that year (the recording and release dates given in this review occasionally differ by a few months from those posited by some sources, but are the dates quoted by Impulse! in 2009), is foursquare in the classic quartet tradition. The line-up is still intact, augmented on one track by second bassist Art Davis, and the material comprises two Coltrane originals ("Brazilia" and "Song Of Praise") and two standards (the soprano saxophone feature "Chim Chim Cheree," from the Walt Disney musical Mary Poppins, and "Nature Boy"). Much of the album is deeply rhapsodic, and despite an attempt by liner note writer Frank Kofsky to contextualize it as something out of Leon Trotsky's permament revolution, the only horses The John Coltrane Quartet Plays might frighten would be very buttoned down or very nervous.

Ascension, recorded in June 1965 and released in February 1966 (a second version, replacing the original "Ascension" with an alternative take at Coltrane's request, was released a few months later, and is included here), is undeniably iconoclastic. But it's hard to hear it as anything other than creative and nutritious jazz. The theme is a short sequence of notes, not unlike the "Acknowledgement" motif on A Love Supreme, to which the ensemble return, in ragged glory, at the conclusion of each individual solo. Coltrane provided some scales to be used as the bases for improvisation. Nothing else was pre-written. The ensemble is a ten-piece in which the quartet is augmented by trumpeters Freddie Hubbard and Dewey Johnson, saxophonists Sanders, Marion Brown and John Tchicai, and bassist Davis. Ascension is a magnificent and monumental work, full of passionate, newly-wrought improvisation, a rough diamond to set alongside any other landmark album in Coltrane's discography.

New Thing At Newport, recorded in July 1965 and released in February 1966, is only partially a Coltrane album. The quartet's twelve-minute reading of "One Down, One Up" is followed by four tracks by saxophonist Archie Shepp's group featuring vibraphonist Bobby Hutcherson, bassist Barre Phillips and drummer Joe Chambers. "One Down, One Up" was later re-released on the Impulse! album My Favourite Things: Coltrane At Newport, a fuller account of the quartet's 1963 and 1965 appearances at the Newport Jazz Festival. 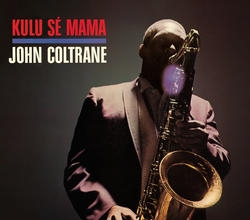 Kulu Se Mama, recorded in June and October 1965 and released in January 1967, sees Coltrane return, for the near nineteen minute title track, to the larger band format introduced on Ascension. This time the band is an eight-piece, again with Sanders on second tenor saxophone, and it is percussion rather than horn heavy. If it had been recorded in the 2000s, "Kulu Se Mama" might be labelled jam band or groove jazz. It's a vamp-driven, tuneful, African-informed piece which contains wonderfully soulful solos from Coltrane (on tenor), Tyner and bass clarinetist Donald Garrett. Anyone who enjoys the astral jazz of albums like Sanders' Tauhid (Impulse!, 1967), or pianist/harpist Alice Coltrane's Ptah, The El Daoud (Impulse!, 1970), will love "Kulu Se Mama." The two remaining tracks, "Vigil" and "Welcome," from the June sessions, are by the quartet. "Vigil" is a motor rhythm free, tenor and drums feature. "Welcome" is a lyrical and amiable affair in which at one point Coltrane references the tune to "Happy Birthday To You."

Meditations, recorded in November 1965 and released in September 1966, stirred up almost as big a furore as Ascension when it first hit the shops. Again, it's hard to understand the ferocity with which the album's critics set upon it. The quartet, now a sextet with the addition of Sanders and Ali, are heard on a five-piece suite, a la A Love Supreme, which opens with the near thirteen-minute, two-tenors feature "The Father And The Son And The Holy Ghost." The track is fierce, multiphonic stuff, with bristling extended solos from Coltrane and Sanders. "Consequences" explores similar territory. "Compassion," "Love" and "Serenity" are more mellifluous. "Compassion" has an extended outro reminiscent of the "African" groove of "Kulu Se Mama;" "Love" is unashamedly pretty; "Serenity," at three and a half minutes by far the shortest track, is as the title suggests.

Listening to the music collected in The Impulse! Albums - Volume Three it's hard not to wonder how many of Coltrane's post-A Love Supreme detractors actually heard the albums—or, perhaps, how much or how many of them they actually heard. Jazz fans who may have believed the hype, and shied away from these 1965 recordings, will be richly rewarded by checking them out. There's a world of rapture and magic to be enjoyed here.

Tracks: Introduction; One Down, One Up; Rufus; Le Matin Des Noire; Scag; Call Me By My Rightful Name.

Tracks: The Father And The Son And The Holy Ghost; Compassion; Love; Consequences; Serenity.