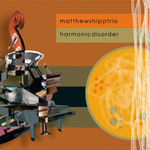 One of today's most iconic artists, pianist Matthew Shipp has fearlessly ventured into numerous genres in search of new means of expression. From stark chamber-like acoustic settings to electronic collaborations with DJs, programmers, and hip-hop artists, Shipp has defied simple categorization. His previous recording for Thirsty Ear, Piano Vortex (2007) found him returning to the acoustic piano trio format with bassist Joe Morris and drummer Whit Dickey. Harmonic Disorder is the empathetic trio's sophomore effort, taking up where the previous session left off, moving further into dense, challenging territory.

Shipp's chromatic lyricism is incisive and focused on the angular opener "GNG," and rapturously unfettered on "Mr. JM" and "Zo Number 2." The introspective "Orb" finds him exuding abstract blues, while the pensive title track, bittersweet "Mel Chi 2," and moody "Compost" showcase his opulent abilities as a sensitive interpreter of ballads. The standards "There Will Never Be Another You" and "Someday My Prince Will Come" are given stirring treatments, the former a quicksilver abstraction, the later a rousing deconstruction. Establishing further ties to the tradition, the playfully Monkish "Roe" and the Ellingtonian swagger of "Light" reveal Shipp's debt to the masters as they regale with a vivacious swing that is both adventurous and accessible.

Over the past few years, guitarist Joe Morris has been doubling more frequently on his second axe, contrabass. While Morris' earliest efforts on upright were entirely serviceable, his recent forays reveal the blossoming of a truly expressive technique, as exemplified by his radiant arco work on "Quantum Waves" and plangent pizzicato on the dark title track.

Rekindling their telepathic rapport, Dickey reprises his mid-nineties role as Shipp's key drummer. His tastefully restrained playing on the previous trio session has been augmented by a slightly more fervid approach, as he recalls the days spent alongside Shipp and bassist William Parker in tenor saxophonist David S. Ware's powerhouse quartet. Dickey is a versatile performer; "Zo Number 2" features a roiling, extended excursion of thunderous excess, whereas "Orb" showcases his subtle brush work.

Another brilliant installment in a growing and varied discography, Harmonic Disorder is a bracing interpretation of the classic piano trio and continuing proof of Shipp's abilities as a composer and improviser of the highest order.