By Tim Price
December 9, 2004
Sign in to view read count
When John Coltrane died in 1967, he left behind a huge legacy of recorded music. Making sense of it all is an enormous task. Check out our suggestions for six views of Trane's last ten years. With Blue Train , John Coltrane not only firmly established his own voice on the tenor saxophone, but also proved his abilities as a bandleader and composer. The musicians on Blue Train , hand-picked by Coltrane himself, play superbly not only as individuals, which is to be expected of players of such high caliber, but also as a cohesive unit—a rare occurrence in an era where "all-star" bands would come together for one session, then disband just as quickly.

John Coltrane's maiden voyage for Atlantic Records was the fulfillment of all the potential he'd demonstrated with Miles, Monk and on his own Prestige recordings. Recorded in May 1959 (one month after completing Davis' Kind of Blue ), Giant Steps is Coltrane's first recital to feature nothing but his own original compositions, and is the culmination of his obsessive foray into harmony.

The soulful folk songs—past, present and future—which make up The Complete Africa/Brass Sessions are a celebration of freedom: the freedom to create on a higher plane, the freedom he felt in playing with his new quartet.

A Love Supreme is the essential example of the genius of John Coltrane. In what has become the apotheosis of jazz music, this eminently accessible work bridges the gap between music and spirituality, between art and life. With the ultimate incarnation of the jazz quartet, Coltrane brings together all of his turbulent elements into a cohesive paean to spirituality, one which is fully appreciable by the uninitiated.

This posthumous release, recorded in June of 1965, is a perfect point upon which to delineate the Transition between Coltrane quartet's golden age, and the book of revelations that followed. Transition finds them on the stylistic fault line between the spiritual outreach of A Love Supreme and the turbulent explorations of SUN SHIP. These performances are plenty intense, yet traditional matters of tune, tempo, tonality and time are still apparent, whereas two months later ( Sun Ship ) the band was immersed in the spirit of exploration.

Expression extends on the mellifluous finale of "Offering." Trane's stirring prelude sets up Alice Coltrane's roiling piano solo, until the tenor returns with extravagant, billowing phrases. In closing, the previously unreleased "Number One" offers a clear snapshot of the quintet's special brand of group improvisation: As the rhythm section feeds their leader a churning stream of sounds and colors, Coltrane works fervently to develop ideas that transcend his beloved chord changes. In the end, there is a note of frustration to this final performance. John Coltrane had run out of time, with much left to accomplish. Listeners should return to "Offering," and wonder at just how much jubilation John Coltrane left behind. 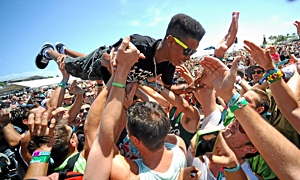