By JEROME WILSON
November 2, 2017
Sign in to view read count
Joe Rosenberg is a soprano saxophonist who, at one time, lived in the Bay Area collaborating with musicians like Dewey Redman and Buddy Collette and recording tributes to Eric Dolphy and Ornette Coleman. For the last several years he has been living in Asia and also collaborating with French musicians. These two CDs, by different configurations of his ensemble, showcase the sensuous, intriguing music he's been making lately. 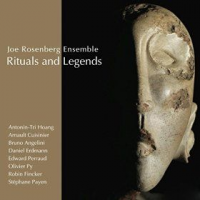 Rituals and Legends features anywhere from two to five saxophones per track playing music that originally comes out of Africa and Asia. "Ramkali" is an Indian melody with two sopranos unwinding slowly over a languorous piano-led rhythm section. When it comes to their solo space Rosenberg and Daniel Erdmann go down different paths, one creates a dreamy, melodic flow and the other sound off in a crankier, higher-pitched mode. "Akazehe" is a Burundi greeting laid down as a repeating riff by the piano and bass with three saxophones chugging over it. Rosenberg takes an intricate, serpentine path over the rhythmic turbulence, Stephane Payen slowly works up to fierce intensity on alto and Erdmann, on tenor, rolls over the bumpy beat with measured lower-register blowing.

The rhythm section does a 4/4 creep in the beginning of "Teen Taal" before a sax quartet of soprano, alto, tenor and baritone come in wriggling and twisting in unison. The sax players all dodge in and out of one another with precision and pianist Bruno Angelini has room for his own stimulating, brisk solo, all this over Arnault Cuisinier's implacable walking beat. "Kecak," a Balinese chant and dance, utilizes five saxophones playing long lines together like tuned foghorns before a shift to deliberate hammering piano notes and percolating unison sax passages that alternate with woozy, drifting features for each member of the rhythm section. The alternate version of "Ramkali" is not a mere clone of the first. This take has a slower, late night vibe with the saxophones taking on a cooler, bluesier tone. 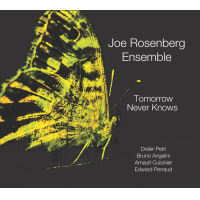 For his 2017 opus, Rosenberg changes some of his ensemble's personnel. The pianist, bassist and drummer remain the same but the additional sax players are replaced by cellist Didier Petit. Obviously that means more space for the rhythm section and that's immediately evident as they begin the opening "Lalit," drifting along with spare piano notes and tense percussion before Rosenberg and Petit surge in playing long tones and the tempo picks up until the quintet coalesces into a fast, shimmering raga groove.

Jaco Pastorius's "Portrait Of Tracy" gets a beautiful, languid statement by soprano and cello before Rosenberg starts improvising short, brisk phrases over prickly rhythmic turbulence. Appropriately for a Pastorius tune, bassist Cusinier gets a showy turn of resonant solo plucking and bowing and Petit also takes a flashy, swooping solo. John Lennon's "Tomorrow Never Knows" is a real highlight with smeary cello and decorative piano adding drama to the familiar drum groove and Rosenberg doing a strong and smooth rendition of the melody. Then Angelini's piano scrambles over the steady rhythm vamp, Perraud takes a deliberate solo and Rosenberg bleeds and honks, all as the beat rolls on. "Before" and "During" are shorter atmospheric pieces with a semi-abstract tension that lead into Ellis Marsalis' "After" which starts out like a Paul Bley performance with Angelini making slow, hesitant passes at the melody and Cuisnier and Perraud filling in the spaces before Rosenberg joins in playing a sad, yearning melody and the entire piece slowly begins to sway to a torpid tropical rhythm.

Working quietly out of the spotlight, Joe Rosenberg is making remarkable music of sly beauty and elegance.

Tracks: Lalit; Before; Portrait of Tracy; During; Tomorrow Never Knows; After.