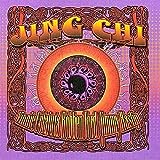 This is actually a fairly relaxed set compared to some of the barn-burners Tone Center has released of late. The impression is that of three friends who decided to sit down and jam on a hot August night, aware of their chops but more interested in a tempered musical conversation. For the most part the strategy works well, keeping Jing Chi from falling into the usual trap of "sound and fury signifying nothing" that tends to plague fusion albums. Like many jazz combos, this bunch seems most at home with the blues, evidenced by Ford's rapturous wailing on tracks like "Crazy House."

There are some nice diversions here, particularly Ford's crystalline acoustic playing on a tense "Train Song" and his head-smashing metallicity on the opening of Colaiuta's "Aurora." Haslip takes a heavily synthesized vocal on the ethereal "In My Dream," a big change of pace. Colaiuta reminds us that he's a master of all kinds of grooves, his polyrhythms setting up obstacle courses for the strings to playfully navigate. Jazz-rock pioneer Brian Auger adds some hot organ to the cool drive of "Man in the Ring," and his interaction with Haslip at solo time is priceless. Steve Tavaglione's EWI synth and programming are present here and there for atmospheric support, buoyant but unobtrusive. This disc is yet another triumph for Tone Center and the great fusion revival.