[Ridl] has mastered his technique so thoroughly that he can create ideas, moods, tempos, images almost at will, weaving a rich fabric of musical experiences with a sense of an evolving whole.

Pianist Jim Ridl's new CD, Your Cheatin' Heart, is a jazz take on some country and western classics along with some standards and original compositions. It is rich with novel ideas and textures and is bound to attract attention. So I was excited to attend one of two CD release performances, this one at the Deerhead Inn, and the other to take place on Labor Day at the Brandywine Jazz and Wine Festival. I drove up from Philadelphia to the Delaware Water Gap, met two friends, Lew and Sue Krieg, for dinner, said hello to Jim and the group, and settled in to hear the music. (With the group's and the Deerhead's permission, I also tried my hand at a few photos, three of which are included here.)
The live performance enabled this quintet, consisting of Jim, J.D. Walter doing vocals, Ron Kerber on soprano sax, Steve Varner, on bass, and Jim Miller on drums (the same crew as on the CD less Jef Lee Johnson, who played guitar and mandolin on two tracks of the album) to go beyond the rigors of a recording session to create a lively and intense jam session, led by the inspiration of the moment to create a very spontaneous, driving set of creative inventions that had the crowd at the edge of their seats, frequently applauding and shouting approval.

Jim Ridl is not only a master of jazz piano and a composer/arranger of great capability. In addition, he has mastered his technique so thoroughly that he can create ideas, moods, tempos, images almost at will, weaving a rich fabric of musical experiences with a sense of an evolving whole. Sitting at the piano played by the likes of Keith Jarrett and John Coates, he made clear that he is second to no one in improvisational power, subtlety of expression and, when called for, driving energy. Furthermore, working with this group of seasoned musicians, he amply demonstrated that he can provide the leadership that a group needs to really swing and work well in tandem. Each soloed intently in ways that coordinated with the others.

The idea of bringing vocalist J.D. Walter into this group was a brilliant coup. J.D. is a Philadelphian who has taught in the Music Department of the University of the Arts and recently relocated to New York City. He has been labeled a "scat singer, but he is much more than that. What he does is to use his voice as a unique musical instrument. The human voice is perhaps the quintessential tool of musical expression. Walter uses all the elements of voice, pitch, loudness, timbre, inflection, utterance, and syllabification- as a means of jazz expression. His vocal range is astonishing, and he has complete control at all registers. An idealist, he is uncompromising, always participating fully in the group's musical experience, never lapsing into the typical singer's mentality of dominating the group or doing "scat as a showpiece for a few bars. I wouldn't be surprised if he ultimately distinguishes himself as one of a very few vocalists whose improvisations will be transcribed and studied.

Saxophonist Ron Kerber is a seasoned veteran of the music scene in Philadelphia and internationally. A relaxed and experienced player, he absorbed the sounds of the others and then came on with his own solos that increased in intensity and virtuosity, creating some echoes of Trane's soprano sax and his "sheets of sound. I especially enjoyed Kerber's creativity with Ridl's composition, "Grazed by Light. Kerber, like Walter, is very disciplined in his approach, and no note is superfluous with him. At the same time, he invokes diverse stylizations to develop a controlled energy and a feeling of "time remembered.

Steve Varner on bass and Jim Miller on drums provided strong rhythmic support, and did some fine solos of their own. Miller was able to range from a flowing mix a la Elvin Jones to Gene Krupa's and Louis Bellson's hard-hitting swing style. With this group, he appeared able to take risks beyond his more typically modest and conservative backup approach. Varner puts his whole body into his bass playing, establishing a full sound with a minimum of embellishment. For example, he did a very solid, charismatic solo on Sonny Rollins' "Oleo. 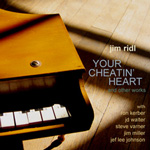 In this set, the first of two, the group started off with the Cole Porter standard "I Love You, then did Ridl's composition, "Grazed By Light, followed by an interesting Ridl piece entitled "Antiphon, where each musician takes up the melody in a different key. They went on to "Your Cheatin' Heart and several other tunes from the CD, wrapping up with a smashing version of Sonny Rollins' "Oleo in a way that would make Sonny proud.

Regrettably, I had to leave before the second set in order to make the long drive back to Philadelphia. As I packed up my camera, said goodbye to my friends, and walked towards my car, I could hear the sounds of "Caravan (also on the CD) wafting through the night air. There is nothing like a great jazz experience to warm up the "chill, still of the night. At the Deerhead Inn, I've rarely been disappointed.