BY JEFF WINBUSH
November 24, 2009
Sign in to view read count 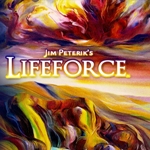 Jim Peterik describes his music as "jazz that rocks." As far as self critiques go, that's a fair assessment. After Jeff Beck found critical and commercial success with Blow by Blow (Epic, 1975), it opened the door for other rock guitarists (Rick Derringer, Craig Chaquico, Ronnie Montrose) to jump in and start playing jazz fusion or New Age instrumentals. Whether that makes these guys serious jazz musicians or slumming rock n' rollers who shouldn't quit their day jobs is subject to debate.

The Grammy Award-winning Peterik made his name as co-writer of "Eye of the Tiger," for Sly Stallone's 1982 film, Rocky III ,and his band, Survivor, went on to enjoy other chart-topping hits such as "The Search Is Over" and "High On You." Prior to Survivor, Peterik was the guitarist for The Ides of March, and wrote and sang its number one hit, "Vehicle." On Lifeforce, he plays both guitar and keyboards and puts together a solid group of musicians, including vocalist Lisa McClowry and Steve Eisen on sax and flute.

Peterik is an established success as a songwriter with a natural affinity for writing catchy hooks and sweet melodie; but rock, not jazz, is his first love, and to his credit he doesn't pretend otherwise. While he cites Pat Metheny, Keiko Matsui and Dave Grusin as musical influences, his own style is more "jazzy" than strictly jazz.

Like a proud papa, Peterik revisits three of his biggest successes, ("Vehicle," "Eye of the Tiger" and "The Search Is Over"), giving himself and Clowry ample opportunity to stretch their vocal cords. The album straddles between light rock and smooth jazz without belonging totally in either genre. Despite adding horns, keyboards and flute, neither McClowry nor Peterik are attempting to pass themselves off as jazz singers. Their strengths are in pop music and power ballads and they don't wander too far from familiar territory.

Lifeforce may be too rocking at times for jazz purists but neither is it pandering to the smoothed-out radio set either. It's tough to figure out what audience Peterik is shooting for. He is very credible as a guitarist, delivering the goods on a funky reimagining of "Eye of the Tiger." Eisen's flute and sax solos are outstanding throughout. Peterik's talent for putting together a solid group of musicians is impressive and he gives them both direction and space to express themselves.

As an album divided between mellow instrumentals and pop stylings, Lifeforce is a bit fragmented in its execution to be completely successful. Is Peterik totally buying into this musical direction? More often than not, the answer is "yes," but it seems the search isn't entirely over, for Peterik isn't totally committed as he tries to have the best of both worlds. This is an energetic, likable and upbeat effort by a musician who knows a good groove when he hears one. However, the next time out he should completely take the plunge instead of dipping a toe in.