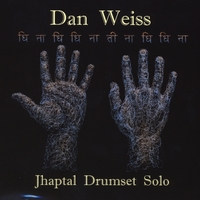 The use of Indian rhythms in jazz—in some way, shape or form—has become somewhat commonplace. While spicing up some improvised music with the addition of a sitarist or tablaist might be enough of an Indian-based excursion for jazz musicians who merely want to gloss over the surface of possibility, drummer Dan Weiss is no such dabbler. His extensive studies with Pandit Samir Chatterjee—a virtuoso tablaist and, as evidenced from his work with Weiss, a fine educator—have helped Weiss to expand his cultural and drumming horizons.

Weiss put his broad knowledge, intellect, chops, and Indian rhythm-infused sensibilities to good use when he created Tintal Drum set Solo (Chhandayan, 2005), and this record is a sequel of sorts. On Jhaptal Drum set Solo, Weiss explores "the 10 beat cycle known as Jhaptal," translating music for tabla to the drum set. He works improvised ideas into the rhythmic compositions at hand, and the marriage of vocal percussion, drum set and guitar, from Miles Okazaki, create a fascinating blend. Okazaki is the straight man, delivering trance-inducing lines of regularity, which serve as a constant for Weiss' far-reaching ideas.

Sometimes, Weiss touches on a groove, but most moments find him running—in a more rhythmically expansive manner—over his kit. While Weiss' drumming on each track can be broken down for a blow-by-blow explanation, trying to focus in on any single track is beside the point . This is about the whole, about the concept. This is music for those with a penchant for challenging rhythmic workouts and strong observation, not for a casual listen on the way to the gym. Hearing all thirty-six tracks, while requiring a good degree of concentration and stamina, isn't nearly as challenging as it must have been to create these rhythmically vital snapshots.

With Jhaptal Drum set Solo Weiss continues to deliver cross-cultural rhythmic marvels which help to elevate him high above the Indo-jazz pretenders.