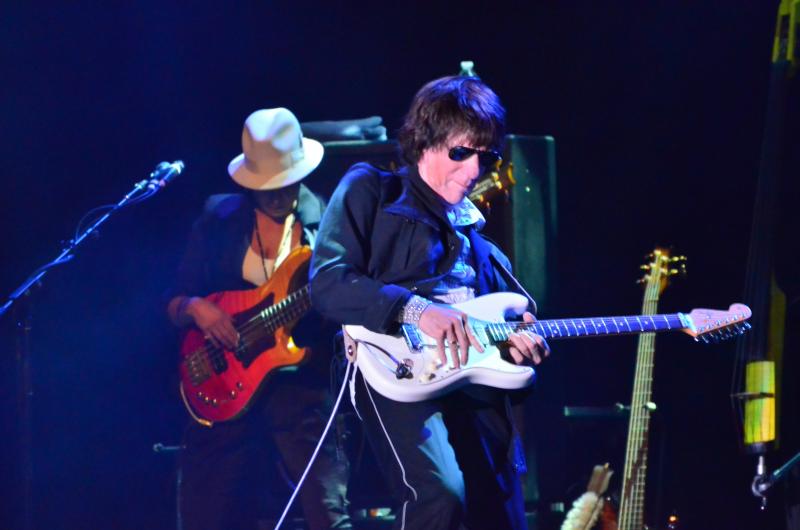 Jeff Beck is rock royalty. He has twice been inducted into the Rock 'n' Roll Hall Of Fame—as a member of the Yardbirds (in 1992) and as a solo performer (in 2009). His career has spanned over 50 years (first appearing on a record in 1964 playing guitar on the Fitz and Startz single "I'm Not Running Away."

In 1965, he was recruited into the Yardbirds, replacing another guitar god, Eric Clapton. His stay in the band was short, lasting less than two years. After leaving the Yardbirds, Beck formed the Jeff Beck Group, featuring, among others, Rod Stewart on vocals and Ronnie Wood on rhythm guitar and bass. This group released two classic albums for Epic Records, Truth in 1968 and Beck-Ola in 1969. The group disbanded in 1969. Beck eventually reformed the band in the early '70s with a completely different lineup and released Rough and Ready (Epic Records, 1971) and Jeff Beck Group (Epic Records, 1972). In 1973, he came together with Tim Bogert and Carmine Appice to form Beck, Bogert & Appice and release two albums on Epic Records—the eponymously named debut album (1973) and Live In Japan (1973).

As a solo artist the majority of Beck's music has been instrumental in nature. His innovative sound fuses blues, rock, pop, jazz, a bit of metal and even some electronica. During his career he has won a number of accolades (including a Top 5 ranking among Rolling Stone magazine's "100 Greatest Guitarists of All Time") as well as multiple Grammy Awards.

On a warm Wednesday evening in Huntington, NY, Beck and his band treated the mostly middle-aged crowd at the Paramount to a blistering performance of boogie-woogie, jazz drenched rockin' blues. Prior to the legendary guitarist's performance, Tyler Bryant warmed up the audience with a fantastic, solo acoustic set. The 24-year-old guitar prodigy sites Beck a major influence. This was quite evident in his short, energetic, bluesy and impressive set.

After Bryant left the stage, there was a short intermission and as the clock approached 9pm, Beck and his band appeared onstage and before the group had played a single note, the audience in the sold-out venue erupted into a thunderous ovation. Beck, who is a few months short of his 71st birthday, gave a riveting performance. His band was a powerhouse. Together he and his compatriots took the crowd on a musical journey through his long and winding career (making stops along the way to pay tribute to successes achieved with Bogert and Appice, the Jeff Beck Group, as a solo artist and to perform some choice covers).

The band, featuring Rhonda Smith on bass, rhythm guitarist Nicholas Meier and Jonathan Joseph on drums, rocked hard during the opener, "Loaded." From the start Beck proved why he is a guitar heavyweight. His sounds is unmistakable. On this night, as always, his playing was a full frontal attack on the listener's senses, filled with a myriad of precision notes, textures and tones that would be almost impossible to replicate (unless you were the master himself) and a highly imaginative take on everything he played. Those close enough to the stage were treated to a show within the show. These lucky fans were able to watch first-hand, up-close-and-personal as Beck bent strings, worked the fretboard, plucked notes without benefit of a pick and generally made the guitar sing and soar.

Former Wet Willie frontman, Jimmy Hall helped Beck turn back the clock to the late '60s and the Truth LP by handling the vocals on "Morning Dew" while Beck sat back and played like the virtuoso that he is. Hall's performance was outstanding as he also skillfully handled the vocals on Sam Cooke's, "A Change Is Gonna Come," Jimi Hendrix' "Little Wing" as well as a funky version of Stevie Wonder's "Superstition" (a song that Beck had recorded with Bogert and Appice).

The evening's hands-down highlight was the show-stopping instrumental performance of the Beatles' "A Day In The Life." The delicate, expressive and insightful arrangement took the piece to places that Lennon and McCartney most-likely hadn't imagined when they created the song. Beck's guitar phrasing was masterful, something to behold. It's no wonder that this arrangement of the classic track won Beck a Grammy Award for Best Rock Instrumental Performance.

Following "A Day In The Life," the main set ended with a rousing version of " Rollin' and Tumblin.'" Other highlights of the main set included the Mahavishnu Orchestra tune "You Know You Know," "Hammerhead" (another Grammy winning instrumental), "Why Give It Away," "My Tiled White Floor" and "Goodbye Pork Pie Hat" which segued into "Brush With The Blues."

The encores were a cover of the standard, "Danny Boy" and "Going Down." Even at this late juncture in the performance, Beck's guitar moaned, cried and screamed. When the last notes had been played, the crowd exploded into a chorus of applause punctuated by deafening whistles and shouts for more. The closing cheers provided a fitting ending to the concert that began with a similar show of affection for the guitarslinger. It was a brilliant and revelatory evening and Beck's performance was stunning.

When you're in the Rock 'n' Roll Hall Of Fame, a lot is expected of you—especially when you perform. When you've been inducted twice, your performances are expected to be almost perfect. The fans, who came to Huntington to see the man who many consider the greatest guitarist ever, were not disappointed.