BY DAN BILAWSKY
March 28, 2010
Sign in to view read count
If pianist Jean-Michel Pilc hadn't become a musician, he might have had a brilliant career as a philosopher or historian. Throughout John McCormick's film, Jean-Michel Pilc: A Portrait, which highlights Pilc's music and his thoughts on music and art, Pilc doles out grains of truth that are brilliant in their simplicity and speak directly to his manner of performing and composing. Pilc explains that he has never drawn a distinction between different styles or labels, like "classical" or "jazz," and he offers up the thought that a composer is actually an improviser-of-sorts. 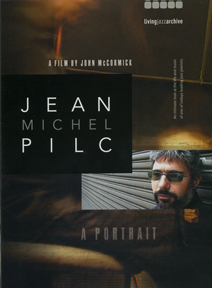 Jean-Michel Pilc—A Portrait, released in 2009 on DVD, is an honest look at an artist in a variety of different settings. The strongest parts of the film deal with Pilc's thoughts on music—often given in a masterclass-like setting with trombonist Joe Beaty and saxophonist John Beaty—and his solo performances. Pilc's topics range from great artists, such as Pablo Picasso, Igor Stravinsky, Claude Debussy and Stanley Kubrick, and how they were "looking for the magic," to the rotation of the earth and how it relates to form and music. While reading these statements might make them come across like a form of high art snobbery, Pilc always backs his ideas up with profoundly direct musical ideas that connect with what he says.

Mitch Borden, the owner of New York's Smalls and Fat Cat clubs, touches on the visual nature of Pilc's performances. McCormick, to drive the point home, lines up Pilc's dizzying chromatic lines and aggressive statements with video images of speeding cars and busy street life in New York. The music presented in this film is no less impressive than the ideas that spill out of Pilc's mouth. He touches on low-key gospel-tinged music as the film unfolds but then the next performance is a highly aggressive trio interpretation of "So What." Later, the interplay and stormy exchanges between Pilc, longtime drumming pal Ari Hoenig and bassist Johannes Weidenmueller, nicely contrast with the more pristine nature of the solo performances that were filmed in a studio setting. While the video quality varies a bit, with some of the material from the clubs looking a bit grainy compared to the controlled environment of a bright and empty room with Pilc behind a piano, the quality of music is high throughout.

Pilc's profound music is presented in another setting on this audio disc, where he's joined by bassist Boris Kozlov and drummer Billy Hart on True Story. While a few choice covers are thrown into the mix, the program leans heavily on Pilc's original compositions. The hushed reverie of "The Other Night" is intensified by all the little nuances that Kozlov and Hart provide, and the peppy groove of "PBH Factor" develops into a tropically infused performance. "A Brief History Of Time" is set off with a simple, yet beautifully crafted, melody that develops throughout this journey.

The middle of the album features the most straightforward, jazz-centered material. "Kingston, NY" is built on a slow, loping swing groove with a fat bass sound from Kozlov. Every piano note speaks clearly on "Try To Remember" and Pilc's "B.B.B."—the longest track on the album—has strong ties to the music of Thelonious Monk. If Dr. John and Jacky Terrasson were locked in a room with two pianos, they might end with something similar to Pilc's sly take on "My Heart Belongs To Daddy." The trio sizzles on this one and Pilc's piano is at the center of it all.

The title of the album is the name of a five-scene suite, with each track lasting around three minutes or so, and a lot of ground is covered. The opening scene has evil undertones, with some deep and cavernous notes arriving from the depths of the piano, but the next scene is almost like a musical depiction of the tides changing. While truth is present in each of these musical stories, beauty and musical greatness are also a large part of the picture.

Scenes/Tracks: Introduction; So What; Solo Piano Studio Session; Live At The Fat Cat; My Little Suede Shoes; St. James Infirmary; The Other Side; Child, Animal, Groove; Green Spleen; In A Sentimental Mood; Playing And Whistling At Home; Blues For Mac; Cherokee; Epilogue; Credits/Radioactive.