By John Barron
September 6, 2007
Sign in to view read count 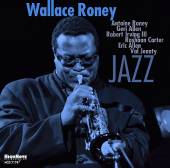 It's hard to imagine Wallace Roney making anything other than a bold statement with the trumpet. The Philadelphia native's razor sharp tone and vigorous pin-point precision has been on the cutting edge of modern jazz since his early days with Tony Williams and Art Blakey's Jazz Messengers. On Jazz, Roney, along with his wife Geri Allen (keyboards) and younger brother Antoine (reeds), delves into a sonic landscape laden with modern funk grooves, simplified melodies and chops-heavy soloing.

The first two tracks, "Vater Time and "Children of the Light, are embedded with Roney's unremitting chromaticism, creating a rumble of unresolved tension. The spirit of Miles Davis, Roney's main mentor, is ever- present, especially on the ferocious, backbeat driven "Revolution: Resolution and the pensive waltz "Her Story. A conscious homage to electric-era Miles can be heard on Sly Stone's "Stand. Roney's dissonant arrangement of the funk classic features both Allen and Davis alum Robert Irving III on keyboards, complemented by Val Jeanty's turntable scratching and sampling.

Bassist Rashaan Carter and drummer Eric Allen both adhere to the groove-oriented nature of the disc while maintaining a progressive edginess, challenging any notion of overt simplicity. A fascinating example of drum and bass interplay is found on "Fela's Shrine, where Allen's drum barrage perpetuates Carter's ethereal, low- end thumping.

Jazz is full of provocation. Roney and company aren't necessarily presenting an ideal of where jazz is today, but rather a lush representation of the genre's possibilities. This music is challenging, vivacious and, above all, soulful.