BY C. MICHAEL BAILEY
June 17, 2012
Sign in to view read count
We can only hear "My Funny Valentine" so many times presented in so many manners. Writer Scott Yanow, in his book The Jazz Singers: The Ultimate Guide (Backbeat Books, 2008), called for a moratorium on singers recording this and several other songs because, like "Stairway to Heaven" and "Freebird" (for those from behind the Cotton Curtain), we have heard these songs enough. One way that an artist may address standards fatigue is to avoid them altogether and write their own songs. This is exactly what Louise Van Aarsen and Rebecka Larsdotter have done, and done in contemporary and lasting style.

Rocket scientists are nothing new in music. Russian chemist Alexander Borodin, a contemporary of Erlenmeyer and Kekulé in the laboratory, was a member of the Russian "Mighty Handful" of classical composers that included Modest Mussorgsky and Nikolai Rimsky-Korsakov. Denny Zeitlin is an intrepid clinical psychiatrist by day teaching at the University of California, San Francisco and an equally inquisitive and probing jazz pianist by night. Bryan May, guitarist for the English rock band Queen, holds a doctorate in astrophysics from the Imperial College of Science, Technology and Medicine. Enter now Dr. Louise Van Aarsen, Senior Research Scientist, Center for Novel Experimental Therapeutics at Dana-Farber Cancer Institute.

With that settled, Van Aarsen, a Dutch native transplanted to the United States, has been studying in her spare time with East Coast uber-songstress Rebecca Parris, who also produces Van Aarsen's debut recording Destiny. This collaboration was beneficial for both artists. Van Aarsen submitted to the tutelage of one of the finest jazz vocalists and Parris was given a golden chance with a golden talent to move into the production side of things. The results are plush and adult; Parris encouraged Van Aarsen's composing talent, igniting a fire that led to this recording. Globally, there is no darkness in Van Aarsen's musical vision and the base has no place in her repertoire.

The music composed and sung by Van Aarsen may best be described as "grown up music for grown ups." Her subjects are time ("Lately"), love ("Destiny," "Open End") and loss and desire ("Without You"). She is not afraid of singing of domesticity, children and happiness. These subjects are all cushioned in thoughtful arrangements tending toward the southern hemisphere and hyper-exact contemporary jazz production. Van Aarsen's voice is no- nonsense and very easy on the ear. Her phrasing is confident, particularly on the slower pieces like "Remember," reflecting the influence of Parris' titanic ballad talent. She does not shy from playfulness in her delivery on "Open End" and "Without You."

The band is top notch with a string section and an expert harmonica provided by Mike Turk and an orchestra of guitar talent brought by Claudio Ragazzi. Singer Ted Davis and producer Parris join Van Aarsen on "Forever," the three dancing vocal counterpoint to great effect. This may be the aural center of gravity on Destiny. This recording boasts an almost unbearable embarrassment of riches. This is music that is fully realized and is produced as such. Van Arsen's writing plumbs the depths of the commonplace while making them not seem such. We must wonder where she goes from here. 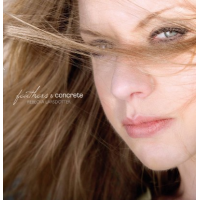 Whether the music on Larsdotter's debut recording, Feathers and Concrete, is jazz is either open to question of completely beside the point. Larsdotter favors a relaxed version of soul-pop, not as R&B dominated as David Sanborn and not as adult contemporary (smooth) jazz as Sade. Feathers and Concrete stands at the edge of the same overproduction that has plagued so many contemporary jazz recordings, without ever stepping into it. It retains just enough that is organic to remain in the realm of improvised music. To illustrate, over the clever pop tones of the disc opener, "System Overload," has Zane Musa's probing reeds obbligato. Guitarist Charles Altura delivers a heady, slightly overdriven, Shawn Lane inspired solo that proceeds Ruslan Siroto electric piano solo. In the more traditional mode, sings an airy acoustic ballad in "Pearl of Glass." Pianist Vardan Ovsepian provides Bill Evans- David Benoit accompaniment and solo, while acoustic bassist JP Maramba gives a cerebrally-structured solo for a chorus. The lyrics are modern impressionistic, more scenes and snapshots than stories.

All songs are sung in English save for "Verlighten Ar En Drom" which would sound perfectly at home as a cabaret piece in the soundtrack of a futuristic drama. Dreamy and light, the piece rhythmically approximates a casual walk buoyed with an electric piano-acoustic bass combination. Feathers and Concrete is a debut deserving consideration because it represents a settling of an European approach to jazz music that attempts to more soundly bridge adult contemporary, popular and soul genres.

Tracks: Lately; Save Your Love; Destiny; Dream of Love; Someone; Open End; Miss You Till I See You; Without You; Remember; Forever; Still The Same; All That We Can Be; Estelle; Sunrise.