By David Adler
February 4, 2003
Sign in to view read count 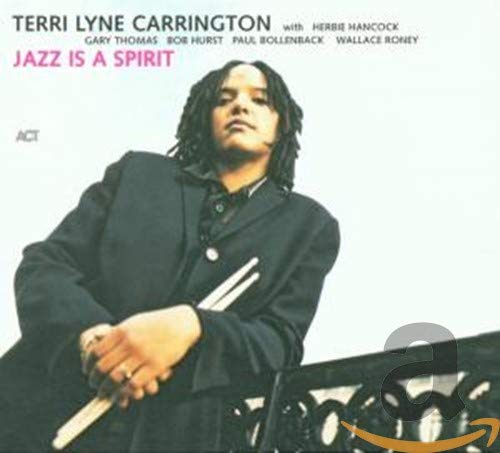 The fact that Terri Lyne Carrington’s output as a leader has been quite spare makes her new album, Jazz Is a Spirit, all the more noteworthy. Her second and third efforts as a leader, Real Life Story and the little-known Voice & Music, were fairly commercial in nature. But this new album finds her at the helm of a fiery acoustic lineup, with bassist Bob Hurst and tenor saxophonist Gary Thomas as the most stable elements (much like her debut TLC and Friends with Buster Williams and George Coleman). Guitarist Paul Bollenback and pianist Greg Kurstin also appear frequently, but they’re relieved on two or three occasions by none other than Kevin Eubanks and Herbie Hancock.

Carrington kicks off with “Jazz Is,” a hip groove track with a forced and extraneous spoken-word bit by Cosby Show alum Malcolm-Jamal Warner. Lars Danielsson’s limping blues “Little Jump” comes as a relief. The originals have a searching, open quality, with pronounced traces of Miles and Wayne. Carrington in fact dedicates the straight-eighth ballad “Samsara” to tenor man Shorter and offers a brief, heavily disguised “Witch Hunt” later in the program. “The Corner,” moreover, begins with a melody reminiscent of “Oriental Folk Song,” then evolves into a smoldering groove in five. The hypnotic, Eastern-tinged “Journey of Now”, co-written by Carrington and Bob Hurst, follows two fragmentary cuts: first the unaccompanied drum solo “Journey Agent”, then 49 seconds of ethereal sextet music titled “Journey East from West”.

Solid originals like “Lost Star,” “Giggles,” and “Middle Way” give the album its backbone. (“Princess,” a contemplative piece co-written with Niels Lan Doky, wrongly includes Thomas among the personnel; the melody instrument sounds for all the world like Gregoire Maret on harmonica.) The penultimate track, “Mr. Jo Jones,” finds Papa Jo Jones speaking to a very young Carrington back in 1984. Then Malcolm-Jamal Warner returns, in a more restricted, sampled role, for the funk-driven title track. It’s perfectly catchy but a bit out of place, like the intro, but that hardly diminishes the impact of this forceful and well-paced record.