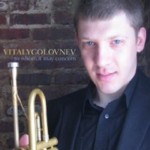 Six years ago I started writing the "Rhythm In Every Guise" column as a reaction to an imbalance that had crept into my record reviews. In many instances I was writing lots about the drummer at the expense of everyone else on the recording. The column became a means of paying tribute to venerable drum set artists, as well as a way of spreading the word on lesser known trapsters.

In a February 2009 review of Vitaly Golovnev's to whom it may concern (Tippin' Records, 2009), I made an unusually brief mention of Jason Brown, an able young player based in the New York City area. Despite the fact that Brown's drumming is sometimes buried in a mix that favors the horns and piano, his work on the recording is well worth examining in greater detail.

During the 32-measure introduction to Golovnev's "Whose Shoes?," pianist Miki Hayama and bassist Boris Kozlov doggedly lay down the tune's slippery foundation. Brown's drumming falls somewhere between accompaniment and a solo. His chatty playing entails persistent time on a partially opened hi-hat and jittery snare drum accents. Throughout the bridge the bass drum echoes Hayama's low notes. Several rapid strokes to the closed hi-hat leap out and anticipate the pianist's next phrase. Crackling stick shots set-up a return to the tune's "A" section, and then a few more bolster a brief portion of the piano and bass line.

Brown's ride cymbal and Koslov's walking bass keep things moving in a brisk, orderly manner during solos by Golovnev, tenor saxophonist Jake Saslow, and Hayama. Working the drum kit from top to bottom, his comping is as much about texture as pulsation. Set against the cymbal's persistence, for a time the bass drum is a distant rumble beneath the leader's crisply executed lines; a little later on, it's more pointed and purposeful. A distinct four note phrase to the mounted tom-tom is followed by an expansive roll on the floor tom during Saslow's turn. For a few bars, pairs of light cymbal crashes provide an insistent rhythmic counterpoint to Hayama's piano; brisk, two-handed multiple stroke figures to the snare enliven another particularly busy passage.

Lithe, persistent rim knocks help stir the eight bar "A" sections of Golovnev's lively Latin-oriented "Corner Bistro." When the soul-jazz payoff of the "B" section arrives, Brown's edgy accents and fills to the snare, toms and bass drum jostle the band with a surprising amount of force. He employs a similar gambit during Saslow's and Golovnev's solos by utilizing the terse discipline of the rim knocks and then cutting loose. As Saslow's phrasing becomes insistent he's answered by a welter of hits to the snare, bass and cymbals, all of which seem to scamper in different directions. In concert with Kozlov, at the onset of the next chorus the drummer's blows to the bass drum punch holes in the basic pulse.

Brown's most impressive performance on the record is "Miki's Trick," in which five measure drum breaks are attached to each 32-bar chorus. Hayama lays out for the entire track, leaving more space for Brown to fill. Apart from the familiarity of the bop influenced drum breaks, Brown is unconcerned with neatness or symmetry. Taking the beat in and out of the pocket at will, he and Kozlov create a variable, loose-limbed swing that never quite loses its focus.

The bulk of the track features Golovnev and Saslow trading full choruses and then exchanging eight and four bar remarks. Aside from playing time tag with Kozlov and making all manner of comments, Brown sometimes plays things that stand out. During Golovnev's first chorus the mounted tom-tom makes a sound like a bouncing rubber ball. For a brief time the ride cymbal is supplanted by the chomping of the hi-hat on all four beats. Later on Brown loudly answers the trumpeter by playing Dizzy Gillespie's iconic lines, "Salt Peanuts, Salt Peanuts," on the tom-tom and snare. At one point during the horns' exchange of fours, a flurry of dense cymbal, bass and snare hits expand alongside of Saslow and don't subside until the midst of Golovnev's turn.

Brown's solo chorus is stubbornly unpredictable; yet, with a little help from Kozlov, it coheres quite well. Just when you're getting accustomed to something—intricate, snapping snare figures over a straight four-to-the-bar bass drum, or a ringing three stroke pattern repeated around the drum kit—another disparate piece of the patchwork is introduced. Immediately prior to the bridge, beats to the toms and snare sound like a portion of the tune's melody. Kozlov enters, playing a variation of his skeletal line from the head. Brown responds by executing relatively simple, probing strokes to the snare, and light, almost subliminal hits to the low tom which empathize with the bassist's tones.