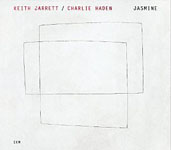 As close to a direct pipeline to the heart as anything, it's hard for music to be anything but intimate reflection of events transpiring in a musician's life. Pianist Keith Jarrett's last release—the stunning triple-disc Testament—Paris / London (ECM, 2009)—was, self-admittedly, impacted by the pianist's "incredibly vulnerable emotional state," but resulted in some of his deepest, most moving solo improvisations yet. Recorded in 2007, the year before the shows from which Testament was culled, the song choices on Jasmine—Jarrett's first non-solo/non-Standards Trio disc in 30 years—speak to the pianist's tenuous marital situation of the past several years. And yet, this collection of intimate, yearning love songs—recorded at Jarrett's home in an informal setting not unlike The Melody At Night, With You (ECM, 1999)—possesses a bittersweet mix of melancholy and joy, suggesting the inherently healing power of music.

Participating in Reto Caduff's 2009 film about Charlie Haden (Rambling Boy) brought Jarrett together with the bassist for the first time since the dissolution of the pianist's much-heralded American Quartet. The two played for well over a decade—from Jarrett's debut as a leader, Life Between the Exit Signs (Atlantic, 1967), through to the American Quartet's swan song, Survivor's Suite (ECM, 1979). Reuniting in 2007 for the filming of Rambling Boy, their relaxed rapport encouraged Jarrett to invited Haden to his home, and the result is this elegant collection of well-heeled standards, including "Body and Soul," "For All We Know" and "Where Can I Go Without You."

Over the course of three decades, much has changed, but some things have remained. Both players have largely become interpreters rather than composers, although Jarrett has rightfully argued that interpretation is composition. Still, their empathic approach to this ballad-heavy set—only the swinging Evans/Mann chestnut, "No Moon At All," comes close to breaking a sweat—remains as profound as it was when they were collaborating regularly on original (and more left-of-center) music.

With no rehearsal other than, at most, running through a few changes, Jasmine's sound—like The Melody At Night—is more direct, more immediate than most of Jarrett's recent releases, recorded in larger concert halls. The dryness of the sound makes the warm but slightly funky tone of Jarrett's piano and deeply wooden timbre of Haden's bass feel particularly inviting. Recorded in Jarrett's small home studio, it feels like it was recorded in a living room, with both players at ease, turning a group of nine well-loved, well-known songs into informal conversations, where individual spotlights shine occasionally, but are far more often about gentle give-and-take, lyrical spontaneity and nothing-to-prove economy.

Critics of Jarrett' longstanding allegiance to solo and Standards Trio performances may be disappointed by this perhaps overdue foray outside those contexts, given the choice of material and renewal of a relationship that predates them. But they'd be missing the sublime beauty, elegant serenity and evocative resonance of Jasmine—an album that, like The Melody At Night, rests somewhere outside Jarrett's discography, yet simply couldn't have been made by anyone else.