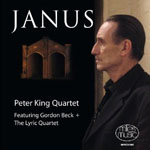 In 1994, the London branch of the international art auctioneers, Christie's, held a sale of Charlie Parker memorabilia. The prize exhibit was the white plastic saxophone played by Parker during his celebrated Massey Hall, Toronto performance with Dizzy Gillespie, Bud Powell, Charles Mingus and Max Roach in 1953. The winning bid of $150,000 was somewhat higher than that possible from this writer, and so the saxophone went to the mayor of Parker's birthplace, Kansas City.

To encourage the buyers, Christie's hired Britain's pre-eminent keeper of the Parker flame, Peter King, to play the horn before the bidding began. And so it was that the assembled Parker devotees got to hear the famous saxophone, played in a style born out of Parker's. It made up for some of the disappointment of not actually acquiring the instrument.

Since 1959, when, still a teenager, he led his first quartet at Ronnie Scott's club, King has been a guiding light of Britain's bop-going-on-hard bop scene. He has worked in a diversity of contexts, from the avowedly revivalistic Bebop Preservation Society through more stylistically inclusive outfits, but whatever the setting, his creative, magisterial playing has remained true to its original inspiration.

Janus proves, once again, that while you may be able to take the bopper out of the bop, you can't necessarily take the bop out of the bopper. His regular quartet expanded to include a string quartet, the album is a recording of a 1997 London concert which had as its centrepiece King's five movement suite, "Janus," inspired by Bartok's Fourth String Quartet, from which it draws its structure.

The affinity between Bartok's visceral, folk dance-inspired music and the steaming sweat of first-generation bop is a close one, and the concert produced some extraordinary playing by King and his band (most notably pianist Gordon Beck and drummer Stephen Keogh). Like his mentor, King's with-strings soloing makes no concessions to the classical tradition, but the Bartokian architecture and harmonies stimulate him to play with unflagging fire and invention.

The album is bookended by three tunes performed by the jazz quartet only, opening with the funky, Jazz Messengers-inspired "Mr Silver," and closing with King's keening, soprano saxophone tribute to Ronnie Scott, "Ronnie's Sorrow" (Scott had died the previous year). An intriguing—and exhilarating—disc from start to finish.