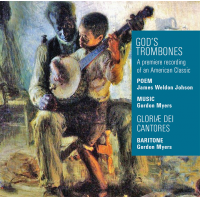 In literature, the "New Criticism" focused on the structure and meaning of a given text, and that these were intimately connected and should not be analyzed separately. Also, texts should be analyzed without regard to the author, era, or circumstances of the text. Clinically, this may be all well and good, but this approach to the analysis of anything is at the expense of the rich loam of experience surrounding art. That is why I will not use the "New Criticism" in considering God's Trombones by Gordon Myers and Gloriæ Dei Cantores. Indeed, rich and deep is the story surrounding the genesis of this project and it is well worth considering the particulars of work.

God's Trombones: Seven Negro Sermons in Verse is a 1927 collection of poems by author/educator/civil rights activist James Weldon Johnson (1871—1938) patterned after traditional African-American religious sermons that Johnson heard as a child. His texts reflect a limited number of archetypes that were common to all black preachers of the locale (Jacksonville, FL) and period. Johnson recalls these experiences in the Preface of his collection:

"I remember hearing in my boyhood sermons that were current, sermons that passed with only slight modifications from preacher to preacher and from locality to locality. Such sermons were: "The Valley of Dry Bones," which was based on the vision of the prophet in the 37th chapter of Ezekiel; the "Train Sermon," in which both God and the devil were pictured as running trains, one loaded with saints, that pulled up in heaven, and the other with sinners, that dumped its load in hell; the "Heavenly March," which gave in detail the journey of the faithful from earth, on up through the pearly gates to the great white throne. Then there was a stereotyped sermon which had no definite subject, and which was quite generally preached; it began with the Creation, went on to the fall of man, rambled through the trials and tribulations of the Hebrew Children, came down to the redemption by Christ, and ended with the Judgment Day and a warning and an exhortation to sinners."

These themes can easily be heard in Johnson's seven verse sermons that make up God's Trombones. The book of poems was well considered and received at the time in the whole of the African-American Community. As such, this rich text was ripe for interpretation.

In January 1965, Smithsonian Folkways Records released a narration of the poems by actor Bryce Bond backed by music composed by William Martin. This performance, while well intentioned, lacks the visceral punch that should be provided by the texts. It would take another 30 years for the collection to be returned to for musical interpretation, this time by composer and singer Gordon Myers supported by the voices and instrumentation of the Gloriæ Dei Cantores (Singers to the Glory of God). Myers chose to set the text of God's Trombones to music and to sing solo with a larger vocal ensemble and use this for his PhD dissertation in the early 1960s. His work debuted at Teacher's College on February 21, 1964 by the Pasack High School Choir from Hillsdale New Jersey. In 1995, Myer's setting for God's Trombones was recorded at Mechanics Hall in Worchester Massachusetts and was released later that year. Paraclete Records picked the masters up and prepared them for re-release, what we are presently considering.

What Myer's God's Trombones amounts to is modern American Choral Music. It is an oratorio of sorts presenting the Biblical story as a set of archetypes covering Creation to Judgement Day. Myers, a baritone, plays the central part to the chorus provided by Gloriæ Dei Cantores. The result is the intersection of the improbable with the unlikely, a very listenable collection of Bible tales cast largely in the vernacular of the African American Church. This is not straight Black Gospel Music. Myers went to elements from that tradition and swirled it with the best of Georg Frederic Handel to create an important and lasting American Choral document. The singing is top notch and the performances bloom with drama and gravity. Myers' voice is potent and exact and the choir inspired. This is a piece of music that deserves to pe heard and preserved.

Listen, Lord – A Prayer; The Creation; The Prodigal Son; Go Down, Death – A Funeral; Noah Built the Ark; The Crucifixion; The Judgement Day.