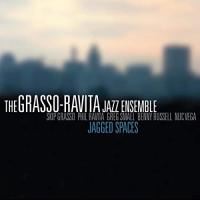 The Baltimore-based Grasso-Ravita Jazz Ensemble is a congenial quintet co-led by guitarist Skip Grasso and bassist Phil Ravita . Its other members are saxophonist Benny Russell, pianist Greg Small and drummer Nuc Vega. Jagged Spaces, the group's debut recording, encompasses nine original compositions: four by Grasso, two each by Ravita and Russell, and one by Small.

If earnestness alone could win the day, this ensemble would no doubt emerge victorious. As it is, their diligence and design aren't quite fresh enough to separate them from an abundance of similar groups who are zealously traversing the same territory. In other words, they are good but not above the norm. Simply a hard-working quintet doing the best it can—and succeeding more often than not—to engender pleasant, listenable music. The songs and arrangements are likewise amiable but less than inspiring.

Grasso's "Jagged Spaces" (with Russell on soprano) sets a jaunty course, bolstered by his second theme, "Her Life Incomplete," on which he takes the trim opening solo. Russell wrote the boppish, bustling "Songhai" and placid "All About Cynthia" (his third foray on soprano), Ravita the robust "Blue Sunshine" and calypso-like finale, "Chasing Shadows." Small's "Circles" sways nicely behind Russell's sometimes over-busy soprano, and pleasing statements from Grasso and the author. Small is an able soloist but the piano he is playing could use some work.

While there is nothing uncomplimentary to note about