By FRIEDRICH KUNZMANN
August 27, 2020
Sign in to view read count 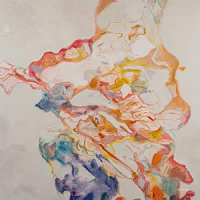 JAF Trio's eponymous debut outing is filled with tight drumbeats, striding bass walks and quirky sax lines sliding down slippery slopes. The young Danish-Finish outfit, composed of saxophonist Adele Sauros, Joonas Tuuri on bass and drummer Frederik Emil Bulow, offers a first glimpse into their studio work after having performed together on several occasions over the last few years. Sauros' influence from working with the group Superposition and Turi's contributing to the Bowman Trio—two ensembles who each recently released their own albums on We Jazz records—can be traced, across a rich half hour record that speaks an immediate melodic language and lives off of intense rhythmic interplay within an intimately close sonic production.

From slowly swinging walking bass passages in "Ninth of the Fifth Floor" through heavy break downs towards the end of "Something New" to driven heads ending on a question mark as presented in the mysterious "Dark Sparkle," the music on JAF Trio tends to know exactly where it wants to go, and the group gets to the point quickly. Bassist Joonas Tuuri's other trio project, Bowman Trio, is a more adequate point of comparison for JAF Trio than Sauros' Superposition. Like his other project, the rather compact structures on JAF Trio share a straightforward nature in common and the trio's interplay remains harmoniously collective rather than deconstructed.

Contrary to Bowman Trio however, the three instrumentalists allow their voices to stretch out further and manifest themselves more physically. Bülow's drum extravaganza against the sax and bass-based ostinato backdrop on "Dark Sparkle" sounds like something from a rock concert (maybe a tad more dynamic), while the jumpy grooves piercing various themes presented over the different charts display dexterous musicianship and reveal shades of hip-hop infusion. Like other We Jazz recording artists, such as Peter Eldh's Koma Saxo or Otis Sandsjö's Y-Otis, the mix of tight beats, decisive bass pops and nimble sax runs appears like a design that has been wrought and polished from head to toes. In contrast to this synthetically constructed notion however, JAF Trio's pulse is alive and kicking in every bar and each beat, begging to be heard.

Jaf Trio offers a brief ride, but it just may be all the more enjoyable for it.