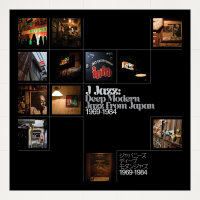 There is a lovely anecdote in Charlie Laurie's introduction to The Blue Note Years: The Jazz Photography Of Francis Wolff (Rizzoli, 1995). Describing the first Blue Note Festival at the foot of Japan's Mount Fuji in 1986, Laurie wrote: "Where else but in Japan can one see a field packed with fifteen thousand teens and twentysomethings roar with excited recognition at the first four bars of Sonny Clark's 'Cool Struttin'?" Young Japanese musicians were as entranced by US jazz during the 1980s as were festival audiences, andJ Jazz: Deep Modern Jazz From Japan 1969—1984 perfectly captures their febrile embrace of the music. Japan shared its enthusiasm with other countries—there were similar movements in Britain and across continental Europe during the 1980s, often linked to jazz as dance music—but the scale of the Japanese phenomenon was unique. What gives the tracks on J Jazz value 30 or 40 years on is that they are not slavish knock-offs of US jazz. Local musicians took the US template, infused it with their own ideas and cultural traditions, and came up with something strikingly different. And in some cases, it has to be said, something best forgotten. But J Jazz avoids the clangers and is composed entirely of the good stuff. Compiled by British collectors Tony Higgins and Mike Peden, the album spans cosmic jazz, abstraction and on-fire dancefloor fusion by artists whose names are generally only known to niche listeners. A running thread through the tracks is the ramped-up drive of the drummers and the bassists (which compensates for the longueurs of soloists whose enthusiasm occasionally runs away with them). The first pressing of a 3xLP edition, with three extra tracks, has already sold out but is scheduled for rerelease in June 2018. One of the vinyl-only tracks is a long-lost collaboration between US bassist Reggie Workman and a septet led by trumpeter Terumasa Hino. This is, apparently, the first time any of the tracks featured on J Jazz have been officially released outside Japan. All good things come to those who wait.