Ola Onabulé: It's The Peace That Deafens 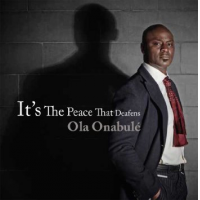 Success in the music business can offer the artist several choices, to continue doing what is popular, or decide to take music in a personal direction. With a respected discography going back to 1995, and having pushed the edge of soul-pop in the UK and Europe, versatile vocalist Ola Onabule opts for expanding upon his diverse bi-cultural heritage in It's The Peace That Deafens. Creating a dramatic departure from his previous releases, Onabulé explores jazz inclinations, world influences, and personal insights, presented in a sophisticated ambience.

Though born in Britain, Onabulé was raised in Lagos, Nigeria, where the inspiration came for this release. Blessed with a voice that spans two octaves, he utilizes his vocal skills in an instrumental manner, offering unique nuances, syncopation, and modulations. Prepared with twelve original compositions, he lays out a conceptual record that flows seamlessly through jazz territory as on "The Girl That She Was," leaving ample space for saxophonist Villu Veski to color the background.

There are African stories of tribal justice in "Jankoriko," performed with a strong juju rhythm, and "Orunmila," a reference to the Yoruban orisha (god) of wisdom, knowledge, and divination. Traces of Caribbean reggae are evident in "Love Again," with deft strumming by guitarist Femi Temowo, and an influence of Earth, Wind, and Fire passes through "The Voodoo." The title track is a sensitive ballad, that drifts into an operatic blues, as Onabulé stretches his voice into the emotional horizon. He wrote this tune as a witness to situations beyond control, where inner stability and survival can be achieved through peace, but it's the peace that deafens.

"Invincible," is highlighted by the interplay with trumpeter Jukka Eskola, laced with a distinctive African jazz vibe, it is a superb upbeat number. As a message to the young men coming up, "In Your Shoes," is advice from a man who has been there, done that, and came out better for it. This is one where he shows his mastery of the classic soul idiom.

After a run of effective soul characterized albums, Onabulé since 2009 has had acclaimed tours and engagements with some of the major European jazz orchestras as the WDR Big Band, and SWR band, both based out of Germany. He is also in high demand on the international concert circuit. The collective years spent in this intense environment, inevitably led to a refined focus in his compositions, and mature approach in his presentations. This record is a substantial convergence of introspection, dedication, and talent, showcasing a consummate performer at the crest of his craft.

Dark Matter; The Girl That She Was; Jankoriko; Love Again; Patience Endures; Herbs For Your Heartache; It’s The Peace That Deafens; The Voodoo; Invincible; In Your Shoes; Orunmila; In The End.