Vince Guaraldi: It's the Great Pumpkin, Charlie Brown: Music from the Soundtrack

By Mark Sullivan
November 25, 2022
Sign in to view read count 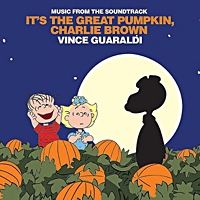 The 2018 release of this 1966 animated television special soundtrack made the music available for the first time. Pianist/composer Vince Guaraldi led a sextet (rather than his usual trio), resulting in richer-sounding, more complex arrangements. This is arguably the best expression of classic Peanuts music. But since the session tapes could not be found, the producers were forced to use the film soundtrack as the audio source. So, the recording quality was less than optimal, and some cues included sound effects and abrupt endings. Remastered from the newly discovered analog session tapes, this version features seven previously unreleased alternate takes. But the big news is the clean stereophonic sound and the absence of sound effects. It's all a kind of pandemic miracle. It turns out that the elusive reels were labeled "Big Pumpkin," the working title for the project.

The difference is immediately audible in the first track. The remastered "Linus And Lucy" is so much clearer, anchored by Guaraldi's thunderous piano and Ronald Lang's agile flute playing (the lack of sound effects is also no small thing). The tune shows up three times in the new alternate takes, shining a light on the arrangement process. All of the living participants attest to the fluidity of the recording sessions—there clearly were no pre-conceived elaborate charts—and the alternate takes illustrate that very well. The second alternate take also offers some space to guitarist John Gray, who made the most of it. Believe it or not, this piece was not yet established as the central Peanuts theme—it was not even used in the previous television special—but it certainly claims pride of place as the opener.

"The Great Pumpkin Waltz" is a charming exception to the brief length of many tracks, giving guitarist Gray more time in the spotlight. "Trick Or Treat" is a trio with flute, double bass and drums, effectively contrasting with the rest of the soundtrack. There is even a bit of non-Peanuts music, in the medley of "It's a Long Way to Tipperary/There's a Long, Long Trail A-Winding/Pack up Your Troubles in Your Old Kit Bag/Roses of Picardy." The previously unreleased tracks add only about nine minutes to the run time, so the album is still a thirty-minute EP. But the improvement in sound quality is huge: the album now sounds like it should have sounded in the first place.