By Elliott Simon
October 2, 2009
Sign in to view read count 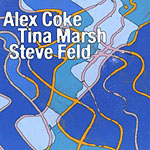 With the passing of Tina Marsh this past June (2009), the Creative Opportunity Orchestra or CO2 for short, lost its earthly voice and artistic visionary. While her CO2 is grand in scope, it most recently spawned this intimate meeting of her extraordinary voice, tenor saxophonist/flutist Alex Coke and Steven Feld who plays ashiwa, an African bass rhythm box.

Marsh is in superb form here and her voice thrills, especially in the higher registers, as it dovetails beautifully with Coke's rounded tones on both tenor and flute. Feld's main gig is as an ethnomusicologist and, in addition to providing an infectiously rhythmic bottom to this session; he brought his field recordings of African frogs and assorted other sounds for inspiration. Not necessarily present in the final mix, they are used for joint and independent improvisation, as on the aptly titled "Frogs" and "Drips," the latter the initial piece in a four-part suite dedicated to obvious muse, soprano saxophonist Steve Lacy.

The title cut features Marsh using her voice instrumentally—her opening salvo effortlessly and elegantly transforms in timbre from violin to flute to humanity. She beautifully adapts Spanish poet Antonio Machado's words through her exquisite phrasing to serve as the lyrics for this positive opener.

There is a decided African sensibility here that goes beyond rhythm as the group blurs the line between 'nature' and 'natural.' Ornette Coleman's "Lonely Woman" mournfully cries,Charles Mingus' "Eclipse" is viewed through the ancient bamboo and reed chordal prism of the kaen (a traditional Lao instrument) while the spirituality of Sammy Fain's "Deep River" is exponentially expanded. "Peace Prayer" is performed to the tolling of the World Peace Bell, one of the largest free-swinging bells in the world, closing this album with an ethereal sense of both loss and hope.