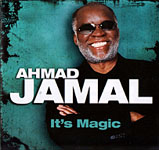 Ahmad Jamal remains one of the few elder statesmen left in the ever-shrinking pantheon of certified jazz legends. He has not stopped touring and recording since he burst onto the scene in the early '50s, making music that would later inspire the rising Miles Davis, who cited the pianist as one of his greatest influences.

How fortunate we are then to be blessed with numerous opportunities to hear this national treasure. Joining Jamal is his regular rhythm section of James Cammack (bass) and Idris Muhammad (drums), as well as percussionist Manolo Badrena, who has perhaps the largest influence on the album's overall sound. This release doesn't give us the light and fanciful Jamal stylings one might be familiar with from the essential Legendary Okeh and Epic Recordings. Thanks to Badrena, It's Magic possesses aggressive, pulsating Latin and African influences, most easily detected on the Jamal originals "Swahililand," "Back To the Island" and album highlight, "Arabesque."

The listener does get a few breathers, though, and for good reason. Jamal's liner notes explain that the album is a tribute to his late friend and producer Jean-François Deiber, memorialized by a thoughtful medley of "Wild Is the Wind" and "Sing," the latter a tune originally performed on Sesame Street. The title track also offers a time for reflection, but Jamal, as always, steers his slower numbers away from the melancholy and directly towards the cool. If you're a Jamal beginner and curious to check him out, it might be wiser to use the aforementioned '50s Okeh and Epic set as your jumping-off point. After you understand why he's earned his impeccable reputation, then give It's Magic a spin.

Dynamo; Swahililand; Back to the Island; It's Magic; Wild is the Wind/Sing; The Way You Look Tonight; Arabesque; Papillon; Fitnah.