By Marcia Hillman
November 15, 2009
Sign in to view read count 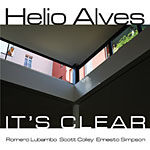 Helio Alves is one of the most sought-after pianists around with a solid technical foundation (starting his classical training at an early age) and a highly developed respect for his fellow musicians. He knows how to listen, how much and when to play and how to build his solos with imagination and interest.

Joined by fellow Brazilian Romero Lubambo on guitar, Scott Colley on bass and Ernesto Simpson on drums, Alves features an eclectic mixture of material—originals by himself and one by Lubambo, as well as known pieces by Brazilian composers including Jobim—and seems to accomplish two goals. One is the emphasis on the constant of Brazilian music: the polyrhythms. Dipping into his cultural roots, Alves includes examples of classic Brazilian rhythm patterns, the chorinho "Doce de Coco" and the afoxe "Coisa #10," both selections approached with the simplicity of a piano student playing for his teacher. An original, "Duality," has Alves playing with a 7/4 rhythm and highlights Colley and Simpson's musical connection.

The other aim is the tightness of the ensemble. The opening track, "Sweeping the Chimney," written by Lubambo with a bebop-like feel, shows how piano and guitar can work together without getting in each other's way. The expert interweaving is apparent on all the tracks both play on together. And Colley and Simpson are both powerful forces whose support is evident throughout, especially on "Helium." Also notable is Colley's lyrical bass in tandem with the delicacy of Alves' piano playing on the title track. It's clear that you should treat your ears to the music and passion on this album.