Saltman/Knowles Quintet: It's About the Melody 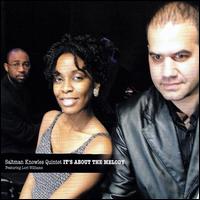 Washington, D.C.'s Saltman/Knowles Quintet (four-fifths of whom were once four-sixths of Soulservice) have staked everything on making tuneful, singable jazz. That's made clear in the liner notes of It's About the Melody. After a list of "Things we like that includes everything from Borat to sweet potatoes to Billy Strayhorn, their dislikes contain but one entry: "Music without melodies.

Little wonder, with melodic gifts like those of bassist Mark Saltman and pianist William Knowles—who met while studying composition in college. They're as good as their word, too: It's About the Melody is stocked to capacity with beautiful, and beautifully constructed, original songs, as lovingly played as they are crafted. The music's core is the unquestionable chemistry of the Soulservice alumni (Saltman, Knowles, saxophonist Charles Langford, and drummer Mark Prince), but its active ingredient is the crisp, clear-as-a-bell voice of Lori Williams. She almost effortlessly glides—one might even say floats—through the tunes which, like all great songs, are easy to sing but almost impossible to sing well.

As if to prove the CD title's point, though, every other element in the quintet's music is downgraded to serve at the pleasure of the melodies. No complicated harmonic somersaults, for example. The changes on It's About the Melody are natural and intuitive, even on showoff-y numbers like the speedy "The Joke's On Me and the scat-fest "Freetime. The rhythms, too, are conventional, waltzing or swinging easy, usually with a touch of bossa.

The problem, if it be one, is that de-emphasizing these components effectively dissipates them—which can make the music, dulcet though it is, rather toothless. The musicians affirm that quality. Though the ensemble is immaculate, the solos (mostly traded by Knowles and Langford) are shaky, lapsing at times into all-too-safe territory. Williams is anything but safe, but she has that Ella Fitzgerald/Jane Monheit foible of sounding so happy to sing that she can't quite sell the ballads, either teary ("Love Echoes ) or introspective ("My Secret Lullaby ).

Of all the flaws jazz can have, however, joy is the hardest to complain about; the solo sins on It's About the Melody are weightier, but forgivable when committed in the service of such high-caliber tunes. Frankly, every solo on the disc could be written, and who could bring themselves to care? As long the melodies stay alive, killing them, says the Saltman/Knowles Quintet, is the single most unlikable thing there is.

Journey Around My Room; The Joke's On Me; Love Echoes; The Shadow in My Mind; What About April; My Secret Lullaby; Brighterdays; On a Pale Star; Freetime; The Color of Midnight.