Fred Wesley & The Swing 'N Jazz All-Stars: It Don't Mean A Thing If It Ain't Got That Swing 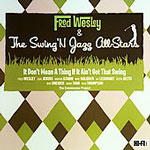 Charity golf tournaments raise millions—sometimes billions—in the name of giving back. Trombonist Fred Wesley uses a different kind of swing to make his contribution: His recent release as bandleader, It Don't Mean A Thing If It Ain't Got That Swing, benefits The Commission Project (TCP), a nonprofit that supports various music education projects around the U.S. Wesley isn't alone in his humanitarianism; the CD spotlights the unique talents of eight other jazz masters—collectively, The Swing N' Jazz All-Stars—in an assortment of "as good as it gets music.

Here's how it works. Each year in early June TCP hosts a jazz and golf weekend in Upstate New York called "Swing 'N Jazz. Attendees take jazz master classes by day and jam with the pros by night. On Sunday, for a contribution to TCP, participants get to play golf with their jazz legend of choice (perhaps not so pro when it comes to golf, but still a good time). TCP uses the donations to commission new works and sponsor promising young talent. Definitely win-win.

At the 2005 Swing 'N Jazz weekend Wesley served as musical director, and after the amateur golfer-musicians had gone home, he shepherded eight musicians from the festival into a nearby studio to record the CD. Just about all the players contributed a tune; among the originals are Wesley's funky "Wicked Walk, drummer Akira Tana's eerily sweet ballad "Dream Catcher, and saxophonist Carl Atkin's quixotic "Acirfa. Jay Leonhart distinguishes himself as a bassist and perceptive vocalist on "Missin' RB Blues, and Bob Sneider (guitar) sends up an engaging waltz with "Par Three. Closing the CD is "Head Start, one of the last, always-uplifting performances of the late Keter Betts (bass). Not to miss: Betts and Leonhart alone in their duet on "Just Squeeze Me. Not to be overlooked: Pianist Mike Holober's understated arrangement of the time-honored title cut and trumpeter Marvin Stamm's clarion playing throughout.

Title: It Don't Mean A Thing If It Ain't Got That Swing | Year Released: 2006 | Record Label: Sons of Sound