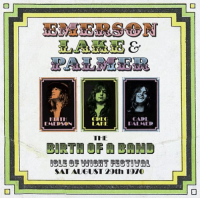 Few groups can look back to a single point in time where they leapt from relative obscurity to fame, announcing the arrival of a new and utterly distinctive sound. Keyboardist Keith Emerson had attracted attention for his staggering technique and theatrical pyrotechnics in The Nice. Bassist/vocalist Greg Lake found himself the center of acclaim with King Crimson's 1969 debut, In the Court of the Crimson King, as well as the group's subsequent American tour and ultimate meltdown. Carl Palmer had brushed with success as drummer on 1968's The Crazy World of Arthur Brown and its mega-hit, "Fire."

But nothing could have prepared these three musicians for the response to their first live performance at the 1970 Isle of Wight Festival. With the release of the DualDisc Isle of Wight 1970, ELP fans can now hear—and see—the short set's significance. Each member's past fed into the group sound, but the performance—dominated by their adaptation of Mussorgsky's Pictures at an Exhibition—heralded a collective sound that simply had not been heard before.

The performance is not without its flaws. Lake's voice falls flat on occasion, and the occasional cue is missed—most notably during "Rondo," a high-energy adaptation of jazz pianist Dave Brubeck's "Blue Rondo a la Turk" where Lake completely loses the changes, often catching up at the last moment. But as raw as the performance may have been, one has to stand in awe of a debut that combined overpowering technical expertise with theatrical showmanship and introduced a completely new sonic canvas—the Moog Synthesizer—to the concert stage. Bob Moog's innovative instrument had been used before, but primarily in the studio, which was better suited to controlling its large and unwieldy panel of patch cords, which had to be manually configured like a telephone operator's analogue console. ELP took the instrument out on the road long before others like Yes' Rick Wakeman would begin using the more portable—and easier to program—MiniMoog.

ELP ultimately became synonymous with excess, finally imploding from the massive egos involved and musical differences dating back to the group's earliest days. Lake always viewed himself as a romantic songsmith, while Emerson's voracious appetite for anything from classical music to ragtime dovetailed better with Palmer's penchant for complex time signatures and orchestral approach. But in its early days this musical tension created some of progressive rock's best moments, specifically ELP's eponymous 1970 debut and 1971 followup, Tarkus.

The only original track on the set is an abbreviated "Take a Pebble," from the group's debut album. While the song is cut down from twelve minutes to just over four, all the components are there—Lake's lyricism, Emerson's stylistically unbound piano work and Palmer's surprisingly subtle brushwork—but it feels more like pastiche than the cohesive extended studio version.

Still, Isle of Wight 1970 and the seventy-minute documentary on the DVD side, The Birth of a Band—featuring live footage from the performance and recent interviews—paint a vivid picture of a group that could only have emerged at a time when nothing was off-limits and anything was possible.

CD Side: Pictures at an Exhibition; Take a Pebble; Rondo; Nutrocker. DVD Side: 5.1 audio mix; 70-minute The Birth of a Band documentary.