Maximize your visibility at All About Jazz by upgrading your musician page from standard to premium. With it, you'll receive All About Jazz home page exposure, a highly stylized / ad-free musician page with bonus features and benefits, an ad, plus you control where you sell your music and so much more.
Learn More
16

BY EDWARD BLANCO
April 5, 2015
Sign in to view read count 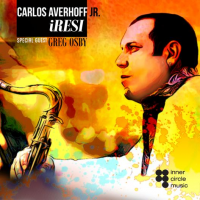 Tenor saxophonist Carlos Averhoff, Jr. draws on a rich cultural tradition blending infectious Afro-Cuban rhythms with intricate melodies delivered in a hard-driving manner on his impressive modern-styled, Latin jazz-tinged iRESI. A classically-trained musician from Cuba and the son of Miami-based saxophonist Carlos Averhoff, Averhoff, Jr. now resides in Boston after graduating from the prestigious Berklee College of Music and is a now an educator on the Berklee faculty and also teaches at the Concord Conservatory of Music. His career as a performer actually began in Cuba playing with pianist Roberto Fonseca among others and recording with the renowned Buena Vista Social Club before sharing the stage in the United States with the likes of fellow Cubans Chucho Valdes and Paquito D'Rivera along with jazz luminaries Dave Liebman, Jimmy Cobb, Louis Hayes and alto saxophonist Greg Osby who appears on this album as special guest.

The idea for this remarkable recording was born back in 2008 while still studying music with the unusual title for the project, coming from a West African Yoruba word which means essentially, the inner light of your soul; the lucky star on your shoulder. Perhaps the inner light of Averhoff's Cuban soul inspired him to pen compositions that, in some ways, mix the harmonies and rhythmic elements of Cuban music with modern aspects of contemporary jazz. As such,