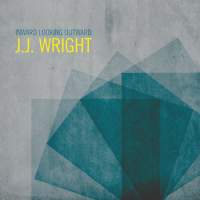 Pianist J.J. Wright has catholic tastes in more ways than one. He's the Director of Music at Sacred Heart Parish, the crypt church beneath the University of Notre Dame's Basilica of the Sacred Heart, and his musical interests range far and wide; Wright's inspired and influenced by everything from the music of J.S. Bach to the work of Thelonious Monk to the songs of Sufjan Stevens. His debut album—a piano trio session with the highly capable Ike Sturm on bass and the rhythmically engaging Nate Wood on drums—hints at some of these influences and points to Wright's faith without ever coming off as pious.

Inward Looking Outward is filled out by six originals—five of which bear the JTC ("Journey Toward Christ") acronym and a Roman numeral for a title—and covers of Jon Brion's "Little Person," Stevens' "The Transfiguration," and Phil Collins' "Take Me Home." No single style or direction informs the music, but a sense of Wright's musical beliefs starts to take shape as the album progresses. The journey begins with "JTC II," as Sturm and Wood jump down the rabbit hole and create a hypnotic, engrossing, lopsided foundation that serves Wright well when he enters with a baroque-cum-modernist mindset. "JTC I" starts out sans bass and drums, but the excitement builds with the arrival of Wright's counterparts, culminating with Wood's drum freak-out. With these two pieces, Wright establishes this trio as a rhythmically vivacious outfit. Then, just when it seems like the modus operandi has been firmly established, he leaves that idea behind, delivering a beautiful, hymn-like "JTC V" that's light years away from what came before. It's the first big stylistic shift on the album, but not the last.

As the album continues, Wright and company continually return to that more rhythmically-focused form of dialogue and construction, but they make pit stops in other places along the way. "JTC IV" is a more traditional look at the modern piano trio vehicle, with the rhythm section swinging away beneath Wright at the center of the song, and "JTC III," which almost comes off like a slightly modified cover of Ray LaMontagne's "Let It Be Me," finds everybody in a calm and centered environment.

It's something of a cliché to say that an artist is one of a kind, but it fits the bill with Wright. His music is informed by religion, yet his music bears no traces of religiosity, and he's plugged into the rhythmically perspicacious nature of modern music, yet he often speaks in measured tones, using direct phrasing that's at once unique and wholly in tune with the ear.