BY ROGER FARBEY
November 1, 2018
Sign in to view read count 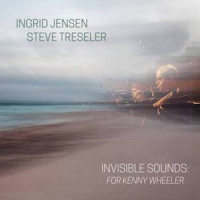 The trumpeter Kenny Wheeler who died on 18 September 2014, aged 84, was one of the true greats of jazz but one who never quite attained the popular recognition that some of his contemporaries achieved. Nevertheless, to his peers and audiences around the world he was an international treasure. Born in Canada in 1930, Wheeler moved to England in 1952, playing with a variety of bands including, notably, John Dankworth's orchestra with whom he recorded the first album of his own compositions, Windmill Tilter (Fontana, 1969) which featured, amongst others, John McLaughlin and Dave Holland.

Trumpeter Ingrid Jensen, also, coincidentally, Canadian-born but now resident in New York City, studied with Wheeler and is a devotee of his music and playing, as is her co-leader in this tribute, saxophonist Steve Treseler. "Foxy Trot," first heard on Wheeler's album Double, Double You (ECM, 1984), opens the set with its memorable descending/ascending melody consolidated by robust ensemble sections.

The tranquil "Kind Folk" from Angel Song (ECM, 1997) is a quintessential Wheeler composition, replete with elegant, complex harmonies. Another harmonically-rich piece is "546" first heard on Wheeler's Kayak (Ah Um, 1992) but here the notable difference is the dramatic split between the more lugubrious opening passage, and the sprightly second section and Geoffrey Keezer's brief but scintillating piano solo.

One of Wheeler's best-known numbers, "Everybody's Song But My Own" from Flutter By Butterfly (Soul Note, 1988) is given a glorious reading by the quintet. The lyrical "Where Do We Go From Here?," from Wheeler's album of the same name (CAM Jazz, 2004), recalls his duet with the late pianist, John Taylor but here is arranged for quintet.

An excellent Jazz Night In America video of the tribute concert to Kenny Wheeler performed by Jensen and Treseler's quintet, and recorded at The Royal Room, Seattle in 2015 (from where two live pieces on this album were gleaned), is available on YouTube: here.

Wheeler was a tutor at London's prestigious Royal Academy of Music where he was the founding patron of its Junior Jazz programme. He was also a recipient of honorary membership of the Academy and the RAM hosted a unique exhibition of his life and works in its Museum in 2013 entitled "Kenny Wheeler: Master of Melancholy Chaos." Wheeler said in a BBC Radio interview in 2010 "Everything I do has a touch of melancholy and a touch of chaos to it. I write sad songs and then I get the musicians to destroy them," but his compositions are also touched by an undeniable genius too and Jensen and Treseler's album is a beautiful testament to this self-effacing maestro.

About Ingrid Jensen and Steve Treseler