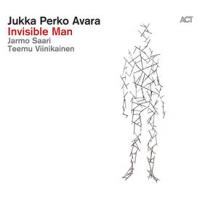 The three major names in the Finnish jazz world featured here come from three very different corners of the firmament. Jukka Perko achieved global recognition as a youth playing alto and soprano saxophone with Thelonius Monk, while guitarists Teemu Viinikainen and Jarmo Saari are better known in Scandinavia, the latter also for his proggy and pop excursions with XL Finland and Von Hertzen Brothers. Together on this disc they combine these orientations to play an assortment of self-penned and cover pieces in a light but very well-tempered mode.

That all three are writers and players with lengthy solo careers might suggest contrasting styles, but in fact Perko, Saari and Viinikainen seem to share a taste for the contemplative both in music and maybe in temperament. A similar recording where vibraphonist Severi Pyysalo featured in Saari's place was a collection of rather mournful but moving Lutheran church hymns rearranged by all three players in a modern idiom, Maan Korvessa (itself a hymn title intimating the deepest, darkest forest world) released in 2008 on local label Levypallo. The 2011 disc including Saari, released on EMI Finland, also featured a selection of pensive hymns, and with its title established the trio's name, Avara.

The current album features more contemporary and worldly issues, but continues a similar style but with self-penned melodies : bright lines and accompaniment from Viinikainen's acoustic guitar, complex and colorful support from Saari's electric guitar, fronted by Perko's mellow saxophone lead. Where the earlier album took straightforward melodies and worked them into a jazz format, most pieces here are neatly constructed around the various tonalities of the three instrumentalists.

While Jukka Perko has strayed little from the traditional jazz canon, both Viinikainen and Saari have had their own essays with experimentalism. Saari's treatments underpin the arrangements, leaving Viinikainen's more acoustic approach prominent and effective. However there is ample space for all players, with a range of tunes from Viinikainen and Perko's delicate "Like Father Like Son" to the Saari"s sorrowful "Helmi," as well as three covers ranging from Peter Gabriel and Kate Bush's "Don't Give Up" to Fauré's "Pavanne." With such a range of experience and depth of approach, it could be that these mellow but joyful instrumental pieces will appeal to fans of both Bacharach as well as Captain Beefheart.