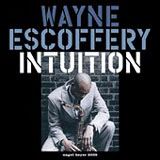 From the circular-breathing introduction to the titular opening track, saxophonist Wayne Escoffery makes clear that his first release, '01's Times Change , was but a calling card, announcing the arrival of a vital new player on the scene. Intuition is a confirmation and, with a band that has spent some time working together, shows what he can do when richer interplay is involved.

Escoffery's command of the instrument is impressive, able to navigate broad intervallic leaps with a sound that is robust in all registers. His writing favours the modal exploration of post-Coltrane territory, but is more concise; there are no long-winded improvisations here, but in the space provided Escoffery, trumpeter Jeremy Pelt and pianist Rick Germanson have the opportunity to contribute vibrant solos that never overstay their welcome.

Any session with drummer Ralph Peterson is likely to be exciting; he is the perfect rhythm section foil for Escoffery's writing, driving each soloist to greater heights of intensity during the ostinato solo passages of "The Alchemist." As torch-bearer for the late Art Blakey, his polyrhythmic fervour makes the kit an equal partner, not just a rhythm section instrument.

Thankfully, with the intensity of compositions including the title track, Pelt's "Tightrope" and a cover of Joe Henderson's "The Gazelle," Escoffery knows when to take things down a notch or ten. "The First One" is a delicate ballad that is as much a feature for bassist Gerald Cannon's resonant sound and tasteful choices as it is for Escoffery's tenor, which is as tender on this track as it is fiery on the more up-tempo numbers. Escoffery also takes a chance with a solo rendition of "I'm Old Fashioned," where he remains faithful to the truth of the piece while managing to imbue it with a personal stamp. As impressive as his playing is on the harder swinging numbers, it is when he is laid absolutely bare that the essence of his style truly emerges.

To further broaden the diversity of the album, Escoffery calls on his wife, singer Carolyn Leonhart, to deliver a rendition of the standard "I Should Care" that ought to be a benchmark for singers feeling the need to interpret the Great American Songbook. Over a Latin-tinged 5/4 reworking by Escoffery with Germanson's Fender Rhodes lending an early Return To Forever feel, a comparison that is further cemented by Escoffery's Joe Farrell-like soprano sax, Leonhart's delivery is the perfect confluence of passion, individuality and faithfulness. "Enduring Freedom," again with Germanson's Rhodes, explores transitional Miles territory, with Pelt paying homage without losing his own stylistic sense, more deeply rooted in Lee Morgan and Freddie Hubbard.

With Intuition Wayne Escoffery has clearly arrived. While stylistically entrenched in post bop terrain, his writing has enough personality to distinguish it. And by surrounding himself with a group of players who have the intuition and inventiveness to take any material and give it a distinctive stamp, he has created a set that positively shimmers.

Visit Nagel Heyer on the web.