BY TROY DOSTERT
August 5, 2019
Sign in to view read count 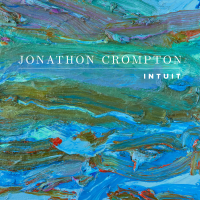 Although alto saxophonist Jonathon Crompton released a promising album, Faustian Pact, with sax-guitar-drums trio Kinsmen and Strangers, in 2018, he's still a relatively unsung presence in the jazz scene. However, with Intuit, his debut release as a leader, that should change. With consistently provocative compositions that combine rhythmic subtlety, harmonic complexity and a sophisticated command of jazz vocabulary, Crompton's music defies easy categorization, gesturing toward a melding of disparate traditions into something distinctive and compelling.

It all starts with the personnel he's put in place. With a rhythm unit comprised of bassist Adam Hopkins and drummer Kate Gentile, Crompton has thoughtful counterparts who can quickly establish a groove and then, just as quickly, deconstruct it. And with a strong array of tenor saxophonists—Ingrid Laubrock, Patrick Breiner and Patrick Booth—Crompton has an especially colorful palette with which to explore his multihued artistry. The three tenorists never appear collectively on any of the tracks; Crompton ends up joining with two of the three on each of the album's eight pieces. On the album's freely improvised title track, we get to hear Crompton in conversation with Laubrock and Breiner, as Hopkins and Gentile expertly complement the horns in a remarkably cohesive feat of spontaneous music-making. Melodic fragments come and go, with episodic harmonies emerging and then dissipating, all of it resulting in a captivating, moody start to the record.

But as effective as the group may be when playing free, the most promising aspect of the recording ultimately lies in Crompton's compositions, which make up the rest of the album. Importantly, several of these utilize only saxophones. The gorgeous chorale-like "Courage" and the closing track, "December," possess graceful motion and affecting harmonic structures that point to Crompton's classical influences, while "Primacy of Gesture" offers lovely jazz-inflected voicings at the close of a piece decidedly more abstract and textural. "Catherine" embodies an even stronger jazz essence, with an infectious rhythmic foundation and use of counterpoint reminiscent of the Rova Saxophone Quartet—albeit with just three saxophones here, as Laubrock is absent on this cut.

Even more stimulating are the pieces that add Hopkins and Gentile, as "Apathy" generates some understated energy through Hopkins' nimble forays and Gentile's percussive elasticity, while "Dreaming" merges Crompton's chamber-jazz propensities with some engaging swing—and a blazing solo from Laubrock to boot. And the alluring "Suite in A Major" manages to invoke and then pull apart the jazz tradition through a delightfully idiosyncratic, ten minute-plus excursion that starts with flourishes of Duke Ellington but finishes in a place far more mysterious and distant.

Sure to become one of the most talked-about debuts of 2019, Intuit is a substantial musical achievement, and a document of a significant compositional voice just coming into his own.