By Dave Hughes
January 1, 2002
Sign in to view read count 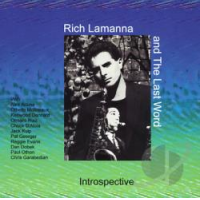 Saxophonist Rich Lamanna, schooled at Berklee, now practices dentistry in upstate New York, but obviously the music has never left him. This is definitively evidenced by this very impressive debut CD Introspective. It’s sort of a sad reflection on the current state of music business economics that a musician with this much to offer isn’t being more widely heard and appreciated.

There’s tasty stuff throughout this disc. Some tunes, such as opener “You Just Left” are modern straight-ahead, while others take a more progressive fusion turn. The influence of bass phenomenon Jaco Pastorius permeates several tunes, providing the inspiration for the tribute “JacoPastOverUs,” as well as “Giant Steps.” This version of Coltrane’s challenging standard is similar to the version performed by Jaco’s Word of Mouth big band – in fact, both versions feature the steel drums of Othello Molineaux.

The personnel roster for this date is split between other local accomplished upstate New York musicians and some well-known names. In particular, drummer Kenwood Dennard and percussionist Alex Acuna (both former Pastorius associates, by the way), infuse their tracks with infectious, hard-driving energy. Bassist Jack Kulp is impressive with his Jaco-like introduction to “Giant Steps,” his crisp acrobatic bass lines, and his skillful soloing on “Obturation”; Kulp also invented the bass line that became the basis for “JacoPastOverUs.” Lamanna, as well as the trio of keyboardists, turn in some skillful, burning solos.

All songs except “Giant Steps” and Charlie Parker and Miles Davis’ “Moose the Mooch” were composed by Lamanna. The compositions are consistently thoughtful and advanced, complex yet still accessible. Some are infused with Latin rhythms that Lamanna absorbed during his early days playing on cruise ships and performing in Peru and Venezuela. Acuna’s percussion, as well as the occasional keyboards of Venezuelan Otmaro Ruiz, keep the grooves solid.

Interesting compositions, inspired soloists, skillful and cohesive band – this CD has it all. Check it out at www.richlamanna.com!