BY GLENN ASTARITA
October 8, 2006
Sign in to view read count 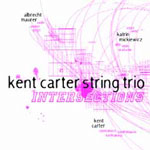 Legendary bassist Kent Carter's broad musicality is about much more than simply dabbling within fleeting interests, as evident on this quasi-chamber jazz session. Whether performing within free jazz circles or the modern mainstream, Carter is often an intense stylist. On this string trio endeavor, the bassist serves as the anchor while enjoying ample breathing room among his bandmates' zigzagging staccato lines.

Cerebral in scope yet sometimes fragile with intent, the band pursues daintily melodic chamber frameworks while also generating a number of unexpected surprises. On "Intentions #1, the artists deliver inwardly moving choruses offset by verbose exchanges, and the strings introduce scraping based tonalities where whimsy and angst share common ground. During this evolving state of musical affairs, the trio communicates strength and passion through mood-altering pastiches of sound. During selected movements, they create a gnomic existence while also inducing trance-like states via circular unison lines. The various plots are ingrained within sonorous interchanges and ominous undercurrents.

On "Who Might That Be? the trio develops a walking motif, accentuated by violinist Albrecht Maurer's nimble plucking maneuvers. Ultimately, the art of improvisation maintains equilibrium with the compositional element. Therefore, the music is not overbearing or steeped within directionless flows. Contrarily, the instrumentalists align technical proficiency with intersecting storylines that bespeak uniformity and an entrancing degree of flux. Repeated listens tend to divulge newfound surprises here.

March 17; Blithe; Eigens Fur Eidens; Intentions #1; Exuberance; Pulapka; Who Might That Be?; Blues Suite; In The Mean Time.