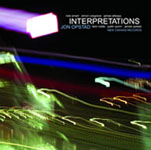 For his second album as a leader and the third for his own New Canvas Records, British drummer Jon Opstad leaves behind the more overt ECM sensibility of 2004's Still Picture. Well, almost. Interpretations is ostensibly rooted in the music of late-1960s Wayne Shorter and Herbie Hancock. The references are clear; still, the fluidity, sense of space and sonic transparency that pervades Opstad's septet suggests how classic albums like Hancock's The Prisoner (Blue Note, 1969) and Shorter's Schizophrenia (Blue Note, 1967) might have sounded had they been approached with the more sonically expansive aesthetic of ECM label owner/producer Manfred Eicher.

Interpretations also takes a nod from Miles Davis' transitional In a Silent Way (Columbia, 1969). "Convergence, with Liam Noble's atmospheric Rhodes and Justin Quinn's clear guitar tone, bears a striking resemblance to "Shhh/Peaceful from that groundbreaking album, especially during vamp that defines much of the tune, driven by Opstad's gentle but insistent pulse. Still, the theme that doesn't arrive until half-way through its nearly eight minutes, is more Hancock than Miles, and the generally soft ambience of the tune is broken, at times, by greater extremes—in particular Simon Cosgrove's fiery, Dave Liebman-like soprano solo.

Opstad, who again contributes all the compositions, manages to find that magical nexus point where strong arrangements, memorable themes and elastic improvisational contexts meet. It's this quality that defined both Hancock and Shorter's solo recordings of the late-1960s, making so many of them both remarkable and enduring. The more energetic "Sixty-Seven has a horn-led theme that dynamically ebbs and flows, creating a unique sense of push and pull over the rhythm section's contemporary sense of swing. Trumpeter Nick Smart delivers a potent solo reminiscent of Freddie Hubbard at his best, while Quinn's reverb-drenched solo works paradoxically against Noble's more aggressive acoustic piano accompaniment. Tenor saxophonist James Allsopp's solo builds in tandem with the rhythm section's almost explosive energy.

Bassist (and brother) James Opstad works telepathically with Jon and, after the more rarified nature of both Still Picture and pianist Nishlyn Ramanna's A Thought (New Canvas, 2005), it's great to hear the two ratcheting things up a few notches. That said, while both play more assertively here it's their innate ability to create drama through implication that's just as compelling.

Interpretations, like many tributes to legacy artists these days, demonstrates a clear respect for its sources. But, through Opstad's engaging writing and the ensemble's strong chemistry (all the more remarkable for this being recorded in a single afternoon), its greatest strength is its unequivocal modernity and the clearly individual voices that define the entire session.