BY DAN MCCLENAGHAN
December 19, 2018
Sign in to view read count 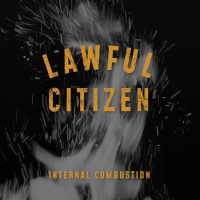 The Montreal-based quartet Lawful Citizen has come up with an unusual subject on which to pin its theme. Its debut disc's title, Internal Combustion, contains the four part "Internal Combustion Suite" that addresses, in part, the power that has driven our cars (and motorcycles, and lawnmowers...) for the better part of the last century. The suite opens with this saxophone and a guitar/bass/drums quartet's dreamy and foreboding groove—tranquil and and eerie at the same time, with a metallic, egalitarian sound that gathers an ominous vibe as it unfolds. It evolves from a Brian Eno-esque type of atmospheric dreamscape into a wailing guitar, screaming saxophone, death metal culmination.

"Part II" of the suite carries on with the slash and burn, heavy seismic-chord mode. It sounds like a jazz group trying to be a hard rock band, very successfully. If we're talking internal combustion engines, we're talking late 1960s/early 1970s muscle cars with big fat V8s under the hood, and maybe some glass pack mufflers affixed to the hot tailpipes—Dodge Chargers and Pontiac GTOs, painted black..

But it's not all roaring fire. "Part III" explores the droning atmosphere of an idling engine, until the accelerator gets pounded to the floor, the pistons pump, rear wheels spin on cold blacktop and the street race is on.

Aside from the "Internal Combustion Suite," the disc opens with somber "The Day After," followed by "February 2," contemplative in the beginning, winding up to a searing and relentless assault that tapers off into a restive groove, that cranks itself up again.

The intensity of the suite gives way to the disc's closer, "Nothing's Changed," an examination of the present, a stop in time between the certainty of the past and the mysteries of the future.