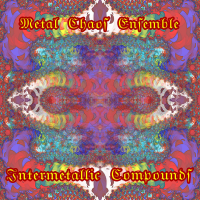 A one-time student of the free improvisational saxophonist, George Garzone, the prolific David Peck (aka PEK) is a multi-instrumentalist/composer and the founder of Evil Clown Records. The ambitious scope of PEK's larger mission is worth noting. The Evil Clown consortium operates, in part, as a large avant-garde cooperative of artists who may show up as part of the label's various groups -String Theory, Turbulence, New Language Collaborative, Leap of Faith and here, on Intermetallic Compounds from the Metal Chaos Ensemble. What all these groups have in common is an affinity for the unique vision PEK.

Yuri Zbitnov, a regular in Leap of Faith and Metal Chaos Ensemble, juggles at least nine different "instruments" on Intermetallic Compounds and within that collection, he runs the gamut from traditional drums through the Chinese stringed instruments, the guzheng and yanqin. Vibraphonist Andria Nicodemou also plays the two Chinese instruments along with other instruments. PEK mans the saxophones and an assortment similar to Zbitnov and Nicodemou. All in all, the three musicians manage about eighteen different instruments, few of them customary to any existing genre.

The title track is the entire album, running a bit over forty-seven minutes. Much of the first ten minutes of "Intermetallic Compounds" are left to an arsenal of musical devices, bells, whistles and metal, almost delicately carving out a wave of sound. Yet "chaos" is not the atmosphere at all—not yet. As the layers begin to build, we enter into something like a grandfather clock factory run amok as sounds swirl together around a warped melody with PEK's saxophone becomes clearer. The sound gets angrier and the noise edgier as the tension builds, leading to a partial collapse into more primal territory and vocalizations that seem not quite human. Then the disarray fades and the sound becomes hypnotic once again.

The music is as much about what individual instruments/devices can bring to the overall sound as it is about individual musicianship. In other words, PEK and company use every available tool to its maximum functionality on an extended aural improvisation that marries people and their tools. Intermetallic Compounds is mesmerizing and filled with an expectancy only for the next unexpected turn of events. This is living, breathing art in every sense of the word.