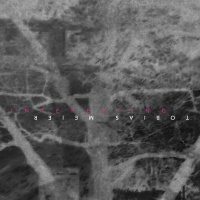 Saxophonist Tobias Meier has figured large in the short history of Alex Huber's Wide Ear Records; of the label's nineteen releases to date, Meier has now featured on nine of them—more than Huber himself. Interesting is the second of those nine on which Meier is credited as leader, fitting as he seems to have multi-tasked—composing, playing saxophone and other instruments, editing and producing. The recording is released on 10" vinyl, meaning that the playing time is less than nineteen minutes—maxi-single length—a pity given all the effort expended in producing it.

The two sides of the disc provide an interesting contrast. The first side—one continuous track, "Nine Microscopic Thoughts," just over ten minutes long—consists of nine miniature pieces that Meier gathered over a year between 2014 and 2015. Those nine pieces "focus on experimental happenings between instrument and microphone, overtone structures and polyphonic overdubs, mixed with microphoned inner worlds of the instruments and (supposedly) peripheral sounds." The track starts promisingly with a fluent sax theme which straight away demands attention... but it ends after only twenty-five seconds as the next "microscopic thought" begins, played alone by the string trio of Frantz Loriot on viola, Slivan Jeger on cello and Dominique Girod on bass. Across the track, these strings do an excellent job of bridging the gaps between the miniature pieces with very listenable interludes, making the track flow without any awkward jump-cuts. Does this track live up to the album title Interesting? Yes, but it is rather too episodic and disjointed to make a really satisfying experience. Several of the episodes are fascinating in their own right and deserve to be heard at greater length, but fade away too soon, which makes listening frustrating.

There is the skeleton of an excellent album here, but it needed more flesh on the bones. Based on the evidence of this record's second side rather than the first, Meier's saxophone and the string trio have considerable promise and the four deserve the opportunity to stretch out more together to produce a longer album.