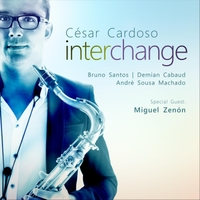 Every now and then, musicians whose names and reputations are relatively unknown may be appraised in some measure by the company they keep. On his third recording as leader, Portuguese-born tenor saxophonist César Cardoso, a new name in this neighborhood, is in splendid company indeed, adding to his working quartet the talents of multi-Grammy Award nominee Miguel Zenon, a Puerto Rican alto saxophonist who has been awarded Guggenheim and MacArthur fellowships, recorded roughly ten albums of his own and appeared on more than seventy others as a sideman. The presence on any date of a musician of Zenon's caliber speaks volumes.

Interchange consists of nine compositions, all written and (presumably) arranged by Cardoso. Most are upbeat and lively, with far more post-bop leanings than bows to Cardoso's Portuguese heritage. Cardoso's solos are fashioned along those same lines (think Michael Brecker or Joe Lovano) while Zenon's are more free-form albeit never disconcerting. Ornette Coleman and Eric Dolphy spring to mind; however, those are but two bench marks among many. The rhythm section, for its part, is hard-working and supportive, with efficient solos along the way by guitarist Bruno Santos (who seems to be using electronic devices from time to time, even though the guitar is listed as acoustic), bassist Demian Cabaud and drummer André Sousa Machado.

The opening title track is pleasantly spry and melodic with ample room for Santos, Cardoso and Zenon to display their admirable chops, as do Cabaud, Santos and Cardoso on the easygoing "Tarde." Zenon returns on the buoyant "May I," emphatic "7 e Tal" and rhythmically impressive "1 de Abril" while the quartet goes it alone on "Reflexo," "Ascending," "Red and Blue" and "Tudo a Seu Tempo," two of which ("Reflexo," "Tempo") are meditative ballads. As quartet / quintet sessions go, Interchange is certainly on a par with many others, even though there isn't much that would set it apart from a host of similarly earnest aspirants.