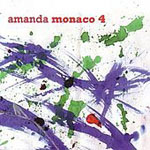 The midrange frequently offers more interesting textures, colors and possibilities in improvised music, precisely because it is sometimes a music that's, even to the initiated, thought of as an art form that embraces the extremes. But for every John McLaughlin or Wes Montgomery, there is a Joe Morris, an Attila Zoller, or an Amanda Monaco.

Guitarist, composer and educator, Monaco's music is unassuming but complex free bop, and hinges mostly on the situations she has set up for her longtime quartet, with reedman Jason Gillenwater, drummer Jeff Davis, and bassist Fraser Hollins (recently replaced by Sean Conly). A review of her first disc, Amanda Monaco 4 (Genevieve Records, 2004), suggested a tentativeness. Intention is more fully realized—that is, while being judicious with its firepower, the group occupies a narrow range of gauzy shading, delicately atmospheric but entirely forward-moving, dark and often coiled in its unadorned improvising.

All but one of the tunes on this disc are penned by Monaco. Gillenwater contributed the fierce "Resolution Lift, predominately a tenor and drums duet. There is a woody flavor throughout the disc, though it's probably most apt for the suitely-arranged "Tel Aviv I Love Her and "Procrastination, both featuring Gillenwater's Klezmer-inspired clarinet tone, rising from traditional reverence to shrill harmonics in a few blinks.

Monaco's guitar language has become grungier on this disc. On the aforementioned "Procrastination she makes use of muted fuzz and explosive, rock-inspired chords to give the undertow a necessary shove.

"Old Skool Flava was initially penned as a tongue-in-cheek blend of jazz and hip-hop, its knotty theme tugging away at a persistent backbeat. Gillenwater and Davis are digging heels almost from the outset, the tenor man's tone and phrasing is a firey complement to Monaco's snaky and tense rhythmic devices—she's liable to hang as much behind the beat as imply it, searching out dissonances where one might expect a bit more sonic resolution.

Even on out-and-out swinging modal numbers like "Deadlines Looming, there is more than a share of freedom. Monaco, rather than traditional comping, futzes with the chordal and melodic nature of the instrument, both behind and in front of Gillenwater's tenor in subtle envelopment that keeps the saxophonist on his toes.

Davis and Hollins are certainly no slouches either, able to expand on the plasticity of Monaco's rhythmic work and keep things moving at a tense pace.

"Intention" this CD surely displays, but the biting ambiguity that characterizes the quartet's playing and Monaco's writing perhaps makes for a curious part of the equation.