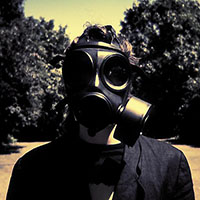 As the primary force behind British rock group Porcupine Tree—in its earliest days, the only force, starting as a solo project in 1991 and becoming a true group in 1993 to record/support its early classic The Sky Moves Sideways (C&S, 1995)—it would be easy to question why multi-instrumentalist/writer/singer Steven Wilson has chosen to release an album under his own name. The stunningly broad-scoped yet undeniably focused Insurgentes is the answer. While fitting comfortably within Porcupine Tree's larger discography, its main differentiator is its consolidation and summation of Wilson's various interests to date.

One of the hardest-working musicians on the British rock scene, Wilson's a prolific writer and performer who also shares his time with groups including No-Man and Opeth. He's also garnered considerable praise as an engineer and mastering wizard, remixing and remastering the entire Porcupine Tree discography with outstanding results and currently doing the same with King Crimson's back catalog. So Insurgentes—available in a two-disc special edition with both CD and a DVD-A versions, offering advanced resolution 5.1, stereo and DTS 5.1—sounds spectacular, literally jumping out of the speakers with raw power, delicate grace and nuanced beauty. There's a lot of ear candy to be found, with Wilson playing no less than 16 instruments along with a wealth of guests including current Porcupine Tree and King Crimson drummer Gavin Harrison, increasingly ubiquitous woodwind explorer Theo Travis, Dream Theater's Jordan Rudess on piano and Peter Gabriel/King Crimson mainstay Tony Levin on bass.

Rather than sounding like any single one of Porcupine Tree's three eras—first, a Pink Floyd-informed, psychedelic space-rock outfit, morphing into a progressive pop band and, finally, on the more recent Deadwing (Lava, 2005) and Fear of a Blank Planet (Atlantic, 2007), adopting a more metallic edge—Wilson finds a confluence of all this and more. The throbbing pulse of "Harmony Korine" alludes to Radiohead, but with a denser, less angular sound; it also alludes to Crimson's nuevo metal during an instrumental section near the song's end. "Abandoner," on the other hand, is driven by electronica-tinged drum programming, a clear nod to the softer side of No-Man. The slow, visceral and dissonant edge of the eight-minute, episodic "Salvaging" is as dark as this largely brooding rock album gets, turning darker still as it descends into its chaotic ending.

Predominantly vocal-based, there's plenty of strong instrumental arrangement throughout—as would be expected from Wilson—including the melancholy ambience of "Twilight Coda" and the direct contrast of the 21/8, riff-based "No Twilight Within the Courts of the Sun," where both Wilson and guest guitarist Mike Outram solo with complete abandon.

Wilson's emergence as a vital force on the British scene will, no doubt, continue to grow. With this first salvo as an official solo artist, he's delivered a largely dark, edgy album that's sure to appeal to fans of Porcupine Tree, Radiohead, latter-day Crimson and No-Man, as well as serving, for the curious uninitiated, as a terrific entry point to the music of this increasingly significant artist.

Harmony Korine; Abandoner; Salvaging; Veneno Para Las Hadas; No Twilight Within the Courts of the Sun; Significant Other; Only Child; Twilight Coda; Get All You Deserve; Insurgentes.