By JOHN KELMAN
November 5, 2011
Sign in to view read count 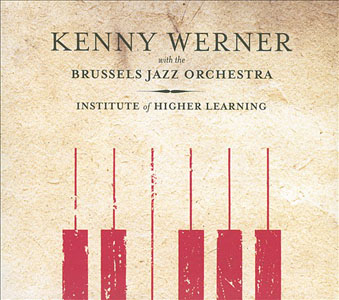 Since coming out the other side of a deep personal tragedy, Kenny Werner has resumed his career with a vengeance. First there was No Beginning, No End (Half Note, 2010), which dealt with the tragic loss of his daughter, Katheryn , in a 2006 car accident, as the pianist and wife, Lorraine, found the way from anger and grief to acceptance and hope through spiritual guidance and music. The smaller-scoped but potent Balloons (Half Note, 2011) came a mere six months later, from a 2010 live performance with his regular touring band. Now, just another half-year on, Werner returns with Institute of Higher Learning, a vibrant big band session that teams the veteran pianist with the Brussels Jazz Orchestra, for a set of four originals and one cover.

"House of the Rising Sun"—the traditional folk tune made so famous by The Animals in 1964 that it became de rigueur learning for budding guitarists—was given a jazzier veneer on John Scofield's This Meets That (EmArcy, 2010). But while the guitarist made it his own, with modernistic re-harmonization and a guest appearance by fellow six-stringer Bill Frisell, it remained relatively faithful. Much as SFJAZZ Collective has been twisting and turning the music of a pop icon—both on the road and on Live in New York Season 8: Music of Stevie Wonder (SFJAZZ, 2011)—so, too, does Werner here, on his sweeping 10-minute arrangement that takes over two minutes to get to the familiar melody, and even then, over some serious re-harms. Cascading horns lead to a fiery duo between incendiary drummer Martijn Vink and baritone saxophonist Bo Van der Werf, building to a thrilling mid-set climax.

But as strong an arrangement as "Rising Sun" is, it's Werner's writing that rightfully dominates the set, including the three-part, 30-minute "Cantabile Suite" that makes clear, from the ambling mid-tempo swing of the "First Movement," that this is a different kind of large ensemble record than the broader array of horns, reeds and woodwinds of No Beginning. Here it's a more conventional big band all the way—five reed/woodwind players, four trumpets and four trombones—bolstered by a four-piece rhythm section, Werner included. But as much as Werner aligns himself to a tradition, he goes against type from the very start, with guitarist Peter Hertmans' visceral, overdriven lines bringing a grittier vibe to the set's first solo, only to peak as Werner takes over, impressionistic motifs peppered with left-hand punctuations.

Like saxophonist Chris Potter's recent Transatlantic (Red Dot, 2011), this set suggests that the full extent of world class players simply can't be measured, as Werner democratically makes Institute of Higher Learning as much a feature for the Brussels Jazz Orchestra as it is the pianist's own writing and performing. Whether it's the balladic "Second Movement," with its lyrical spot for trumpeter Pierre Drevet, or the episodic title track, where the pianist is at his modal best, Institute of Higher Learning is a record that, combined with the other two discs Werner has released this past year, makes clear, in no uncertain terms, that Werner's back...and back, indeed, with a vengeance.