By DAN BILAWSKY
December 1, 2013
Sign in to view read count 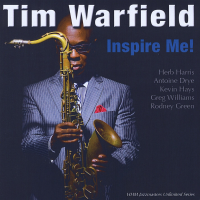 Saxophonist Tim Warfield has a lot of irons in the fire. While serving as "artist-in-residence" at Messiah College, attending to his duties as an adjunct faculty member at Temple University, appearing live under his own name and working with high profile artists like trumpeter Terell Stafford, he also found time to deliver three albums in an eleven month span—Tim Warfield's Jazzy Christmas (Self Produced, 2012), Eye Of The Beholder (Criss Cross, 2013) and the record under discussion here; if that's not musical multi-tasking, nothing is.

Warfield—a once-upon-a-time "young lion" and finalist in the 1991 Thelonious Monk International Jazz Saxophone Competition—is one of the most consistently engaging saxophonists in the game, yet he rarely gets the credit and attention he deserves from the listening public. Fortunately, those inside the jazz community know the real score when it comes to Warfield. He's something of a musician's musician, as demonstrated by the fact that he's played and recorded with everybody from trumpeter Nicholas Payton and vibraphonist Stefon Harris to organist Joey DeFrancesco and pianist Orrin Evans, and his pillowy-to-billowy range and no-nonsense approach have served him well in all of those situations; those same attributes are also ever-present on Inspire Me!.

While Warfield gets top billing here, the album is something of a collaboration between Warfield and Herb Harris. Harris produced the record, wrote all of the material and released the album on his own imprint. If that wasn't enough, he also adds vocals in a few places and picks up his tenor saxophone for one number ("NY Daze NY Knights"). Harris is, essentially, the man behind the album, but Warfield is the man upfront on the album. Every track, from the bluesy "Monkee See Monkee Doo" to the mellow "Robert Earl" to the simply swinging "When I'm Alone With You," serves as a showcase for his horn.

Harris and Warfield, ultimately, deserve the most ink for putting this project together, but a few other noteworthy individuals make some important contributions. Kevin Hays contributes some sterling piano solos and support, trumpeter Antoine Drye stands tall next to Warfield on five of the eight album tracks, bassist Greg Williams is rock solid from top to bottom, and drummer Rodney Green serves as the driving force behind the strongest track on the album—"NY Daze NY Knights." Harris' vocals, which come off wonderfully on "A Tinge Of Melancholy" but sound a bit less comfortable on the skyward reaching melody of "What If's," create another dimension here, helping to bring variety to the table.

Inspire Me! manages to live up to its titular mission while showcasing an incredible saxophonist and his ace backing band. Who could ask for anything more?