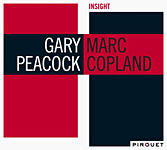 Chiefly known as pianist Keith Jarrett choice bassist, Gary Peacock has nevertheless continually invested himself in a myriad of projects not involving his once marathoning employer. One such endeavor is this duet recording with pianist Marc Copland. Taped during his stint with Copland's New York Trio in May 2005 and October 2007, Insight captures the moodier, more poetic side of their sporadic association.

An oft-overlooked veteran who has worked with such illustrious artists as Kenny Wheeler, John Abercrombie and Paul Motian, Copland's style lies between Bill Evans lithe bebop-rooted playing and the trenchant modernism of John Taylor. His use of sostenuto chording, opalescent voicings and harmonic parallelism, is greatly reminiscent of Taylor's textural classicism. Though it is manifest throughout the disc, the rollicking spirit that drives "Rush Hour" is the one track where the English virtuoso's style is especially redolent. Coincidently, it also recalls Taylor's coltish "Clapperclowe," from the English pianist's 2003 Sketch release, Insight.

Evans' influence is more subtle. It does creep through his phrasing long, flowing 8th note runs and block-voiced lines. "Blue In Green," an impressionistic piece credited to trumpeter Miles Davis and adopted by Evans, is one track where the latter's influence is addressed more directly. That said, Copland is a mature enough player to spin such inspirations into something that is all his own. He does exactly that on "All Blues"—another Davis/Evans classic—as well as "Late Night," a similarly bluesy, ostinato-driven improvisation.

Other spur-of-the-moment vignettes pepper the album. With their coruscating lines and melodic vamps, "The Wanderer" and "Matterhorn" are two worth mentioning not only because of their similar approach, but for the cohesiveness they bring to the program. But the real surprise comes in Stanley Myers' "Cavatina." A diatonic ditty with an easy, pastoral feel, Myers' theme truly stands out in this chamber-esque setting. Peacock's "The Pond," with its marked, dactylic rhythm, also garners attention in that it appears borrowed from the same repertoire that went into the making of A Closer View (ECM, 1998), one of most his most superb sessions with acoustic guitarist Ralph Towner.

While Peacock has arguably reached his creative zenith with Jarrett and Towner, Copland demonstrates, with Insight, that he still has much to offer. This album should not only please fans of Jarrett and Peacock, but the finest of connoisseurs as well.

All Blues; The Wanderer; Blue in Green; Rush Hour; River's Run; Matterhorn; The Pond; Goes Out Comes In; Late Night; Cavatina; In Your Own Sweet Way; Benediction; Sweet and Lovely.