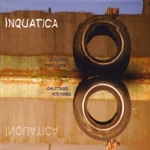 With practically no warning, violinist John Ettinger burst out of the San Francisco Bay area scene and towards national cult status in 2006 with Kissinger In Space (Ettinger Music, 2006). The album—made with tenor saxophonist Tony Malaby, bassist Devin Hoff and drummer Scott Amendola—announced Ettinger as a thrilling new voice in creative jazz and made an irrefutable case for the violin as a heavyweight frontline instrument. Kissinger went on to become an AAJ Publisher's Pick and figured in several best-of lists compiled by AAJ contributors at the end of the year.

Inquatica is likely to cause another sensation. The album is an extension of the groove Ettinger established on Kissinger—by turns tumultuous, ruminative, pretty and rocking, and magically lyrical—but within a new paradigm. This time, instead of a quartet, he's working with just one other musician, drummer Pete Forbes, and has exchanged a conventional theme/solos/theme construct for a set which is 99% improvised, with tracks which, in the main, unfold in a non-linear, non-narrative fashion. In a further departure, Ettinger is once again foregrounding the use of loops—scaled back on Kissinger in favor of unprocessed acoustic violin—which he introduced with his first album, August Rain (Self Produced, 2003).

Miraculously, given the general absence of pre-written tunes and the almost wholly improvised playing, Inquatica is as accessible as its predecessor. Only a couple of tracks have tunes in the traditional sense—one of these is the disc's sole cover, a lovely reading of Hoagy Carmichael's "Stardust"—but Ettinger's melodicism is as acute in improvisation as it is in composition, and this makes for an immediate connection with the listener. His rhythmic vocabulary also remains potent. Forbes gets behind a drum kit to play beat-centric motor rhythms on only a handful of tracks, but the oscillating rhythms provided by Ettinger's loops offer another seductive pulse.

Ettinger winningly defies the geeky, mechanistic approach adopted by many loopists, instead creating motifs, themes, counterpoint, drones, departure points and collages which sound organic and intuitive. Unusually, this is technology at the service of creative music making rather than music enslaved to technological obsession. Ettinger's loops function as active and engaged instruments rather than discrete electronic effects, on occasion—like on the opening "Dancing With The Other Side" and the title track—functioning just like another player, moving and changing through the tracks. It's an approach which dispels any lingering doubts about loop-laden music. There are tracks, too, like "Stardust" and the vaguely Celtic closer "Film," on which Ettinger's violin is basically acoustic, using only subtle pedal effects.

Between them, Ettinger and Forbes add acoustic or electric piano to seven tracks, and Forbes a banjo, played like some alchemical cross between a mandolin and a koto, to two. Ettinger also plays thumping bass on "Layers," with "High Coup" and "Swim" one of three rock-out tracks which recall the title track from Kissinger.

Radiant, transporting and with a beauty which reveals more of itself with each repeated playing, Inquatica is a second masterpiece from an astonishing new star.

Dancing With The Other Side; A Place To Be From; Ship breaking #9; Layers; Inquatica; Stardust; The Wake; Just Like Tomorrow; High Coup; Swim; Something Like Hope; Film.