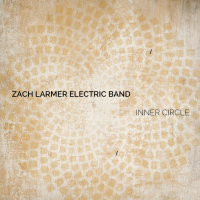 On Miami-based American composer/guitarist Zach Larmer's debut album entitled Inner Circle, he emphasizes his instrumental virtuosity and compositional finesse. Not only does he compose five of the seven tracks, Bassist Juan Pablo Diaz pens "Friedrichshain" and one standard completes the set. Larmer certainly establishes himself as a force to reckoned with in the modern jazz guitar community. Still, as much as Larmers' playing and ear is rooted in the deeper jazz tradition, there are equal chunks of more forward-looking sounds, both harmonically and melodically as well as sonically. Though the focus is on his original compositions, (covering many styles from straight ahead jazz, R&B, fusion, soul-jazz, and Latin), Larmer includes the standard, "Softly as in A Morning Sunrise." The album's only standard, which Larmer sees as something of a bonus track, lasting 13 minutes, it gives the jazz community a chance to hear the maturity and finesse that Larmer and his bandmates brings to an established harmonic and melodic standard.

Larmer has been hailed a prodigy, but don't expect to hear technique over substance. Over the years, Zach humbly admits, "people have impressed upon me the value of speaking through your instrument. If you're saying something with your music, people seem to connect with the genuine nature of it far more than the genre itself. I'm also lucky to be working with some superbly mature players. That sense of space I've cultivated comes from them as well." The balance of Inner Circles' line-up is composed of a flexible set of musicians with equally impressive expressive abilities. Rodolfo Zuniga (drums tracks 3, 5, 6), David Chiverton (drums tracks 1, 2, 4, 7), Juan Pablo Diaz (bass tracks 2, 3, 5, 6), Jermaine Walden (bass tracks 1, 4, 7) Tal Cohen (keyboards tracks 1-8), John Daversa (trumpet, EVI tracks 1, 4) and Brian Lynch (trumpet track 6). All the players bring another level of extant chemistry, which elevates Larmer's pen and playing.

"On The Dock" gets things started with Walden laying down a strong groove on the bass in which Chiverton joins and adds drum fills that builds the energy to the opening melodic statement. Daversa joins Larmer for stating the melody. Cohen provides support and fills. The overall melodic flow is logical and has multiple sections and build nicely. Especially effective is the interlude leading to the first solo in which Daversa switches to EVI from trumpet, building the energy and making a smooth transition to his solo with the EVI. Daversa's solo is strong and develops agreeably with the full support of the group. Larmer's solo is based on different progressions, which builds the energy and gives variance. His tone is clean with just a hint of distortion for sustain and a touch of delay for depth. Larmer's melodic sense is strong and his story telling is deep. After the interlude Cohen solos over an ostinato figure that fits comfortably into the ending statement. This is a reflection of Larmer's understanding of compositional development and his openness to share the space with his capable players. An excellent opener and is the standard of excellence for all the ideas to come.

The New Orleans-inspired "I Left It Bayou" finds Larmer's playing in fine form. Larmer peppers his sophisticated linear phrases with wide intervals and inspired chromatic cascades. He develops a repeated note with interesting rhythmic twist and variations. The solo evolves in sound by the addition of distortion and a synth sound, in which Larmer continues to build to a chordal figure that signals the end of the solo and acts as an interlude to Cohen's solo statement. The music has a strong electro-centric core, but gives the sense of fresh energy that lends itself to the modern sound.

"Softly as in A Morning Sunrise" begins with Larmer's guitar voicings jabbing and ducking to set up the slow groove feel for the well-known nugget. With playful fills and ornamentations, Larmer unfolds the melody with subtlety and character. Again, hearing a player play a standard gives the jazz aficionado a clear sense and feel for the players understanding and command of the long historic lineage of the jazz language. In this sense, Larmer does not disappoint. His strong sense of time, melodic clarity and direction with clear phrases are apparent throughout his solo. His playful motivic development throughout the changes and his chromatic embellishments are enjoyable and build character into his melodic statements. Walden turns in a fine electric bass solo with excellent support from Chiverton's drum set.

Overall Inner Circle is a well balanced mix of unfamiliar and familiar, past and present. The groups play as a cohesive unit and listens deeply to each other. The compositions are excellent and Larmer's playing has that riveting quality that makes people pay close attention with his strong sense of judicious use of blue notes, that features good use of development, and rhythmic figures against beat phrasing, the occasional startling chromatic run, and good use of sophisticated harmonic vocabulary. Inner Circle is a studio recording, it's true, but one that encompasses the unbridled vigor, gift of chemistry and profound impulsiveness of a live recording.

On The Dock; Garden of Eden; Same as It Ever Was; Inner Circle; I Left It Bayou; Friedrichshain; Softly as in A Morning Sunrise