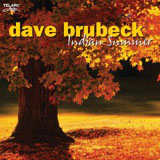 Fifty years after the release of his classic solo session Dave Brubeck Plays and Plays and ... (Original Jazz Classics, 1957), the jazz legend delivers another opportunity for his fans to hear him in an intimate setting. Indian Summer can be seen as a sort of companion piece to Plays and Plays and.... They are, in fact, linked in that Indian Summer's title track was also explored on its predecessor.

These days, it isn't surprising that the 86 year-old Brubeck may not be able to keep up with many of the younger players when it comes to playing up-tempo bop scorchers. However, Indian Summer contains nary a bop-scorcher. At just under seventy-two minutes in length, it's chock full of ballads, mixing standards with a handful of original compositions.

And under these circumstances, many of those younger players might find it hard to keep up with Brubeck, who demonstrates here that his name still deserves to be brought up in all conversations about who should be called the best living jazz solo pianist.

The finest moments of Indian Summer lie in Brubeck's performance of a number of compositions the pianist recorded during his heyday during the 1950s and 1960s. The album features an essential version of the old favorite "September Song, which Brubeck memorably visited back in the early 1950s on the underrated Distinctive Rhythm Instrumentals (Fantasy, 1956). Another highlight is the original "Summer Song, which many Brubeck fans will remember from Brandenburg Gate: Revisited (Columbia, 1961)—the pianist's famous outing with a full orchestra. Brubeck is obviously a fan of this little gem, and it's great to hear a song previously known for its elaborate string arrangements deconstructed all the way down to nothing except the man, his notes and his piano.

This past August, Brubeck's quartet gave a free concert outdoors at New York's Lincoln Center. While most of the set consisted of fun, mid-tempo standards, the leader did indeed foreshadow what Indian Summer had in store for listeners when he played a lengthy solo version of "Somewhere Over the Rainbow. That performance and this album have made 2007 a very special year for Dave Brubeck fans.