E.J. Strickland: In This Day 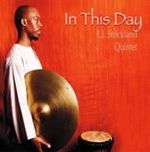 Thanks to his work with Ravi Coltrane, E.J. Strickland is well-established as a talented young percussionist. Coltrane plays producer on In This Day, Strickland's debut as a leader. His compositions display an encouraging focus, and his backup band gives the project a heavyweight punch. The disc's problems come on musical and conceptual detours that hinder the project's overall gait.

"Abandoned Discovery" enters quietly, offering a smiling groove and an intensity level that only gets better. Saxophonists Jaleel Shaw and Marcus Strickland harmonize beautifully on the melody, while pianist Luis Perdomo's Wurlitzer fills the background with electricity. The reeds' processing could be either exciting or annoying, but the resulting buzz makes the risk worth it. It doesn't matter anyway, because Marcus' flowing tenor meshes so skillfully with Shaw's tweaked-out alto, propelled by E.J.'s driving drums and Hans Glawischnig's muscular foundation.

Shaw and Marcus have most of the big moments, both collectively and separately: Their cascading conversations on "Asante" and "Wrong Turn" simply hypnotize. Marcus brought both tenor and soprano saxophones to the party, and his rising soprano on "Robin Fly Away" and the title track is absolutely glorious; he also lets fly with the soprano on the hellacious "New Beginnings," while Yosvany Terry takes over the tenor chair. Shaw's tight sound contrasts Marcus' rich attack perfectly, and Shaw's own solo spot on the contemplative "Find Myself" is a breath of cool air. E.J. stays in the background for the most part, offering sweet texture and brilliant counterpoint, but when he does step out on "Beginnings" and the hellacious "Angular Realms," he announces his presence with authority.

It's a toss-up whether Perdomo is better on electric or acoustic keyboards—his piano gives both "Beginnings" and the swirling ballad "Eternal" a percussive Latin vibe, but his Wurlitzer brings Old School Fusion to "Realms." Congero Pedro Martinez's enticing percussion only appears on four tracks, which is ten tracks less than he should have gotten; his congas mix with the frontline's mesmerizing opening to "Asante," bringing together the tribal and the technical, and he literally dances with Tia Fuller's flute on "Illusions." Martinez' spotlight piece "Perdito's Prelude" is hot, too, but it fades too early and should have been incorporated with the opening of "Beginnings."

The big detours appear on Cheray (Mama Zun) O'Neal's spoken-word pieces "Eternal (intro)" and "In Faith (In This Day)." The two poems may portray the emotional center of E.J.'s music, but there's enough of a musical disconnect to make both pieces seem pretentious; what's more, Charenee Wade's overlapping vocals on the former piece only makes the piece convoluted. Also, David Gilmore's acoustic duet with harpist Brandee Younger on "Robin (intro)" is certainly beautiful, but the composition seems almost schizophrenic in contrast to the rest of the disc.

On the bright side, the blemishes on In This Day show E.J. Strickland isn't afraid to work at the boundaries. Hopefully on his next disc, he'll avoid trying to explain his motivation and (to coin a phrase) just do it.